What is A.J. Burnett Worth to the Pittsburgh Pirates? 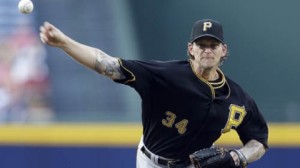 Once A.J. Burnett stated that he will be putting off retirement for at least another year, he became the best available pitcher on the free agent market. Typing that sentence seems a little odd considering that it was only two years ago that the New York Yankees paid the Pittsburgh Pirates to take Burnett off their hands.

In December of 2008, Burnett signed a five year, $82.5 million dollar deal with the Yankees. His first year went well, and he posted an park-adjusted ERA 12 percent better than the league average with a 21.8 percent strikeout rate. The next two years were disastrous, as Burnett managed a 5.21 ERA, second-worst in baseball. After the season, Burnett was sent to the Pirates in exchange for minor leaguers Exicardo Cayones and Diego Moreno along with an agreement to pay $20 million of the remaining $33 million on Burnett’s contract.

Burnett remade himself in Pittsburgh, proving that you can teach an old dog new tricks. He’s bought into the Pirates’ emphasis on groundballs, and his 56.7 percent groundball rate since 2012 trails only Trevor Cahill among qualified starters. While doing so, he’s managed to maintain a very high strikeout rate of 23.6 percent, and a very manageable walk rate of 7.8 percent.

Overall, Burnett has been one of the best pitchers in baseball the last two seasons. His 7.0 fWAR sandwiches him between Stephen Strasburg and Jordan Zimmermann and his 82 xFIP- is better the marks posted by Justin Verlander or Cole Hamels. In 2013, there were just eight starting pitchers with a better xFIP- than Burnett.

For his career, Burnett has had something of a habit of underachieving his peripherals, and 2012-13 wasn’t an exception, as his 3.30 ERA was higher than his excellent components would suggest. Regardless, he’s a very good pitcher who, even at 37, still has some of the best stuff in the game. Hitters still struggle with his two pitch repertoire, and with a fastball that still gets into the mid 90’s and a devastating knuckle curve, it’s no surprise. At times he can be dominant, as shown by the seven outings he had in 2013 with nine or more strikeouts.

Looking to 2014, Burnett figures to be a very good pitcher. Steamer in particular is high on Burnett, projecting him for 3.4 fWAR with an 8.6 K/9 and a 3.3 BB/9, which would make him one of the best 20 or so pitchers in baseball. ZiPS is a little less optimistic, as it expects 2.2 fWAR with a park-adjusted ERA just three percent better than the league average. That would still make him a useful pitcher.

Earlier in the offseason, Pirates General Manager Neal Huntington stated that Burnett would have to go elsewhere if he wanted a market-value contract. However, the Pirates may need Burnett more than they let on.

Without Burnett, the Pirates rotation looks to be headed up by Francisco Liriano, who experienced a big turnaround in 2013, posting a 3.02 ERA and 3.1 fWAR over 26 starts. Liriano also won the Pirates Wild Card matchup against the Cincinnati Reds with seven innings of one-run ball. With his history of inconsistency and high slider usage, Liriano is a bigger performance and injury risk than most pitchers.

Next they have Gerrit Cole, a highly touted prospect who came into his own in September, posting a 1.69 ERA with 39 strikeouts in 32 innings. Cole looks to be one of the top young pitchers in baseball in 2014, and a full season from him could be special.

Behind Liriano and Cole, the rotation is a lot less certain. Veteran Charlie Morton recently signed a three year deal, and he’s a solid groundball pitcher when healthy. However, he’s never thrown more than 171.2 innings in a season, and he struggles greatly against left-handed hitters.

Jeff Locke, Wandy Rodriguez, and Edinson Volquez are in contention for the final two spots, and there are big issues with all three. Locke rode poor peripherals to a 2.15 ERA and an All-Star selection in the first half, but imploded after the break and pitched to a 6.12 ERA, and was left off the postseason roster. His 110 FIP- was one of the highest in baseball in 2013, and suggests that he’s a back-end option at best.

Rodriguez has been an average pitcher when healthy, as his career ERA- of 98 suggests. But, he’s 35, and missed most of 2013 due to a forearm injury.

Volquez was very good in 2008, posting a 3.21 ERA and 3.9 fWAR. Since then, he’s posted the second-highest walk rate among all qualified starting pitchers and a 4.95 ERA. He still has the ability to miss bats, so he’s an interesting reclamation project, especially since he’ll work with pitch-framing wizards in Russell Martin and Chris Stewart, but he’s best viewed as a lottery ticket than a reliable arm.

It should be evident that the Pirates aren’t swimming in starting pitching depth. While top prospect Jameson Taillon could be ready for a midseason callup, there aren’t many options if someone should hit the disabled list, which inevitably happens. Right now, the projected difference between Burnett, and their No. 5 starter, Rodriguez, is 2.5 fWAR, a huge difference. For a team that probably doesn’t have the horses to keep up with the Cardinals, but could be in a tight Wild Card race, 2-3 wins makes a very big impact.

Despite their cavalier attitude with regards to Burnett’s salary, and their refusal to extend a Qualifying Offer, the Pirates need him badly, even if they have to pay $15 million or more.

Burnett’s decision this offseason could have a bigger impact on the 2014 playoff races than that of any other free agent.