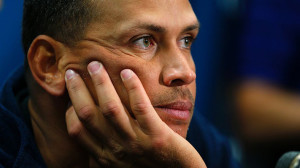 Alex Rodriguez will miss the entire 2014 season after MLB arbitrator Fredric Horowitz reduced the original 211 game suspension for his involvement in Major League Baseball’s Biogenesis scandal. Rodriguez quickly reaffirmed that he would contest the decision in federal court.

An A-Rod spokesman sussed a statement, before the decision was announced saying the suspension was “inconsistent” and based on “false and wholly unreliable testimony.”

“The number of games sadly comes as no surprise, as the deck has been stacked against me from day one,” Rodriguez said in his statement.

The players association sided with Rodriguez to some extent but acknowledged the process as fair.

“The MLBPA strongly disagrees with the award issued today in the grievance of Alex Rodriguez, even despite the Arbitration Panel’s decision to reduce the duration of Mr. Rodriguez’s unprecedented 211-game suspension. We recognize that a final and binding decision has been reached, however, and we respect the collectively-bargained arbitration process which led to the decision. In accordance with the confidentiality provisions of the JDA, the Association will make no further comment regarding the decision.”

Rodriguez was suspended in August for his Biogenesis affiliation. The 211 games was essentially broken down into the standard 50-game ban for first-time PED offenders plus another 161 games for allegedly interfering with MLB’s investigation.

For the Yankees it means his salary will be wiped off the books for 2014 and free up enough money to make a serious run at Masahiro Tanaka. Rodriguez was scheduled to make $25 million in 2014 and $61 million total from 2015-17. Negotiating a buyout of those remaining years could be an option. His play has declined in recent years and taking a year off at age 38 can’t be seen as a positive for Rodriguez going forward.