Right now, the free agent pitching market is all about Masahiro Tanaka. After Tanaka signs, the market for domestic pitchers Matt Garza, Ubaldo Jimenez, and Ervin Santana will finally move forward. All of the above look to be very expensive. $17-20 million over 6-7 years seems inevitable for Tanaka, and the other three pitchers will likely command something in the range of $14-18 million per year. In addition, Jimenez and Santana have draft pick compensation attached.

However, there are alternatives available for the bargain hunter. Here are several pitchers still available that can be obtained for a much lower cost. Their track records suggest they can be viable starting pitchers. 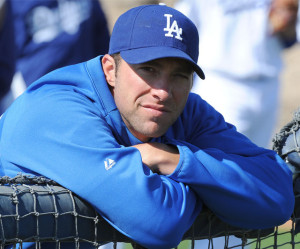 1. Chris Capuano. Between 2008 and 2010, Capuano threw just 66 innings thanks to a Tommy John surgery and other arm issues.  However, over the last three seasons he’s been a solid back-end pitcher.

He’s managed to throw nearly 500 innings with solid strikeout and walk rates of 19.7 percent and 6.3 percent. In fact, of pitchers that have thrown at least 400 innings in the last three seasons, Capuano is tied to 29th in K/BB ratio. Who is he tied with? Matt Garza.

Strikeouts and walks aren’t everything, and Capuano has allowed an above-average rate of hits on balls in play and a few home runs. Still, there’s a lot of year-to-year variability in those numbers, and his 99 xFIP- indicates he could be an average pitcher.

While his 88 mph fastball won’t wow anybody, he’s used a good change to post a swinging strike rate of 10.7 percent the last three seasons. If the reports that he wants a two-year deal in the range of $12 million are correct, Capuano would be a nice addition for several teams. 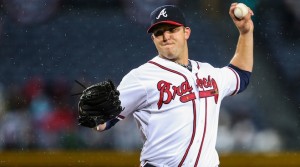 2. Paul Maholm. The 31 year-old lefthander has been the definition of an average pitcher over the course of his career, with an FIP- and xFIP- of 102 and 100, respectively. He looked strong in 115.1 first-half innings in 2013, as he posted a 3.98 ERA with strikeout and walk rates of 16.5 percent and 6.8 percent. However, he suffered through injuries in the second half, and was ineffective in just 37.2 innings, and was left off the Atlanta Braves postseason roster.

Like Capuano, Maholm doesn’t have an overpowering fastball, and he owns a career swinging strike rate of 6.8 percent. He’s made his living by throwing strikes (7.5 percent career walk rate) and inducing groundballs to the tune of a 52.1 percent rate. Since 2011, he’s posted essentially the same fWAR (4.5) and ERA (3.90) as Santana (4.6 and 3.85, respectively). 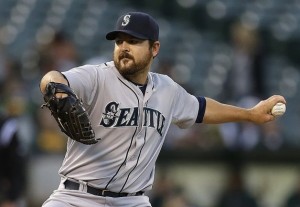 3. Joe Saunders. The veteran lefty had a rough 2013 season, posting a 5.26 ERA in 183 innings. After the season, the Seattle Mariners declined his option, making him a free agent. It was only last season that Saunders looked like a middle of the rotation arm, as he managed a 4.07 ERA with strikeout and walk rates of 15.0 percent and 5.2 percent.

With a fastball that sits at 89-90 and a career swinging strike rate of 6.6 percent, Saunders doesn’t have a lot of upside. What he does offer is stability. He’s averaged 31 starts over the last six seasons, with an ERA- of 102. That might not look impressive. But, when you consider that the Boston Red Sox and St. Louis Cardinals, two World Series teams, gave a combined 25 starts to the likes of Jake Westbrook and Alfredo Aceves it’s evident that Saunders is a useful piece. 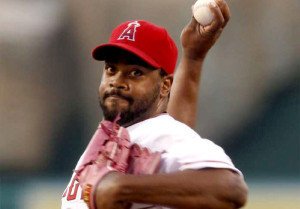 4. Jerome Williams. The 32 year-old journeyman righthander was made a free agent when the Los Angeles Angels declined to tender him a contract. He was projected to earn about $4 million in arbitration, so he’s unlikely to cost much more than Joba Chamberlain.

Williams 4.57 ERA from the last two seasons is mediocre at best. However, he has a groundball rate of 50 percent and has generally avoided walking hitters (6.9 percent walk rate). With a modest strikeout rate of 15.8 percent, Williams has a 101 xFIP-. A good chunk of his problems can be chalked up to a HR/FB ratio of 13.5 percent.

Unlike the other pitchers mentioned, Williams has a bit of oomph on his fastball. While some of his time has been spent in the pen, his heater has averaged 92 mph in the last two seasons. With a 9.0 percent swinging strike rate, there’s reason to believe his strikeout rate could approach the league average. Out of the bullpen he’s managed an ERA- of 87 and an FIP- of 96, so if he doesn’t cut it in the rotation, the team that acquires him should get a decent middle reliever.

It never hurts to have more pitching depth. It’s the rare team that will have it’s Opening Day starting rotation intact come August and September. Acquiring pitching depth is important, and any of these arms present solid options at the back end of a rotation for a very affordable cost.

For a team that is scared by the inconsistency and mechanical mess that is Jimenez, Santana’s awful 2012 season, or the fact that Garza has largely been an average pitcher, putting a few million dollars into one of the above pitchers is a nice low-risk move.