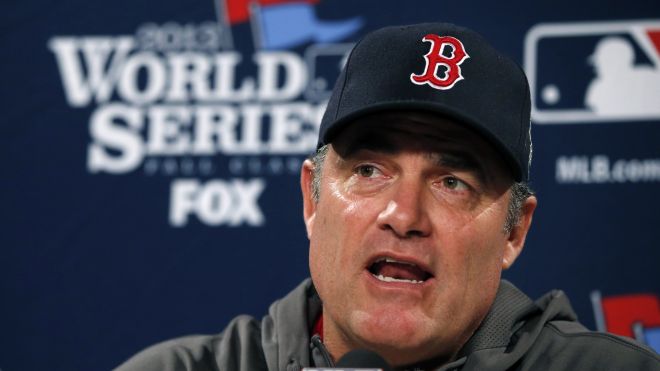 Last year at this time, the Boston Red Sox were a team of newfound hope. After a dismal 2012 campaign that saw them finish with a 69-93 record and a last place finish in the American League East, the Sox had a new manager and second-year general manager Ben Cherington was crafting a roster of complementary players to surround a core of returning veterans.

Today, the Red Sox are fresh off winning the World Series and appear poised for a formidable attempt to accomplish what he has not been done since 2000, when the New York Yankees repeated as World Series champions.

Here is a look at what the Red Sox have done this offseason, and what could happen heading into spring training and their March 31 opener at Baltimore:

The Red Sox had no intention of bringing back all of their free agents, especially 30-year-old center fielder Jacoby Ellsbury, who is represented by Scott Boras. Ellsbury signed an enormous seven-year, $153 million deal with the Yankees.

Though it was a transaction that did not draw significant attention, the Red Sox parted ways with former top outfield prospect Ryan Kalish, who signed a minor league deal with the Chicago Cubs. Cubs president Theo Epstein was general manager in Boston when the Red Sox drafted Kalish out of high school.

The Red Sox opted to replace Saltalamacchia with veteran catcher A.J. Pierzynski, who was signed to a one-year deal to serve as a bridge until top catching prospect Christian Vazquez is Major League ready.

Power-hitting first baseman Mike Napoli agreed to a two-year deal. Right-handed relievers Burke Badenhop (trade) and Edward Mujica (free agent) were brought in to fortify the bullpen. Cuban free agent Dalier Hinojosa is projected to open the 2014 campaign at Triple-A Pawtucket, but he has a chance to have an impact in the Red Sox pen at some point this year.

Herrera, who can play three infield spots, was acquired from the Rockies to offer bench depth.

What Could Happen Before Opening Day

The Red Sox could choose to open 2014 with 21-year-old Xander Bogaerts at shortstop and 25-year-old Will Middlebrooks at third base, but they are still considered the likely destination for shortstop Stephen Drew. The 30-year-old veteran of eight Major League seasons declined Boston’s qualifying offer, meaning that any team that signs him must surrender a draft pick. Legendary baseball reporter Peter Gammons believes that Drew will return to Boston, and that the club will keep Middlebrooks because of his power potential.

Boston’s rotation has talent, and young arms like Brandon Workman, Allen Webster, Matt Barnes and Anthony Ranaudo offer depth. For that reason – and the fact that Red Sox ownership has stated it wants to remain below the $189 luxury tax threshold – the club will likely deal Jake Peavy or Ryan Dempster.

Since it appears that 23-year-old top prospect Jackie Bradley will open the 2014 campaign as Boston’s starting center fielder, the team will probably pursue a right-handed hitting outfielder to complement the rookie. San Diego’s Chris Denorfia is a possibility, according to Gammons.