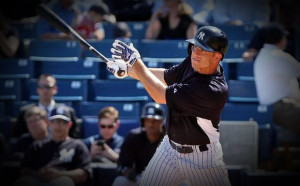 According to Andy McCullough of the Star-Ledger, the New York Yankees are receiving significant interest in Brett Gardner. While the club is not actively shopping Gardner, they are willing to listen to offers.

With yesterday’s signing of Carlos Beltran, and the signing earlier this week of Jacoby Ellsbury, the Yankees have a crowded outfield situation. Trade deadline pickup Alfonso Soriano will be returning to the team after posting a .256/.325/.525 line in 58 games in his second go-round in the Bronx. He might be relegated to DH duties, though Beltran isn’t too nimble in the field either.

Furthermore, veteran Ichiro Suzuki is still under contract, though he’s coming off a career-worst year at the plate where he managed just a .262/.297/.342 line with a dismal 71 wRC+ and 1.1 fWAR.

Gardner has just one year of team control left. He’s projected to earn $4 million in arbitration before hitting free agency next offseason. He’s coming off a season where he had a career-high 609 plate appearances. The 30 year-old outfielder displayed some pop in 2013, hitting 33 doubles, 10 triples, and 8 home runs. Overall, he  produced a .273/.344/.416 with a 108 wRC+ and 3.2 fWAR.

In addition, Gardner can play all three defensive positions. Defensive metrics have consistently ranked him as one of the best corner outfielders in baseball, and he’s solid in center as well. He might have lost a step from 2010-11 when he stole 96 bases, but he still managed to swipe 24 bags in 32 attempts in 2013.

When healthy, Gardner has been an excellent player, providing elite defense and baserunning to go along with solid on-base skills as his .352 career on-base percentage shows. For his career, he’s averaged 4.8 fWAR per 600 plate appearances.

As he only has one year of team control left, Gardner might not command all that much in a trade. But, for a team looking to win now, a $4 million commitment to an outfielder of Gardner’s quality looks very good.