A-Rod Tested Positive in 2006: Here’s Why We Still Care 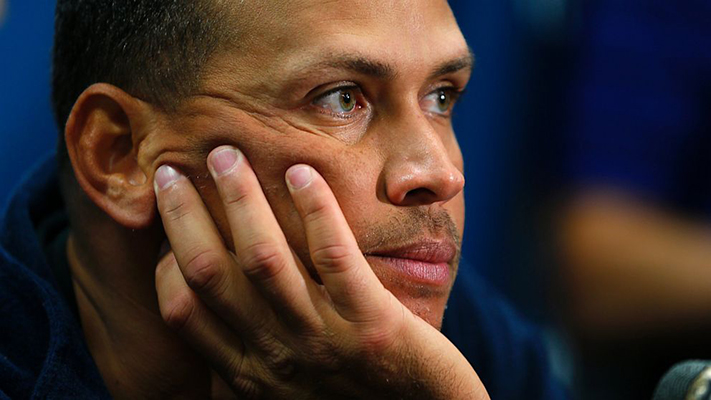 Alex Rodriguez allegedly failed a drug test for a banned stimulant in 2006, a good three years after he previously claimed he had stopped taking PEDs.

Granted, the details behind the stimulant are unclear and it’s yet another piece of evidence against A-Rod’s character mysteriously leaked to the media.

Does it ultimately matter? Not really.

We know A-Rod cheated and it’s pretty clear he did it for a long-time regardless of the actual time frame. We also know he is taking on MLB head to head with his 2014 pay check on the line. A-Rod responds to money and at this point it’s the only thing he has left.

Forget for a second the Yankees’ entire plan of staying under a $189 million dollar threshold may depend largely on A-Rod’s status in 2014 and forget this leaked failed test may or may not impact the legal proceedings which are about to get ugly in the public spotlight next month.

We care about this failed drug test because it’s a pretty clear cut example of yet more information we know MLB has on players who have cheated and yet it has not been released.

What’s most fascinating about this case is how far Bud Selig is willing to go to try to put a cherry on his own Sundae.

For Selig, burying A-Rod and his outlaws (the others suspended from Biogenesis) would represent some perverted sign of closure on the steroid era.

But this failed drug test implies the opposite, MLB systematically and carefully decided who will be the scape goats and has hidden the overall picture time and time again.

It’s why bringing down Manny with his failed drug tests and banishing him and Barry Bonds from the game was acceptable, but pursuing an investigation on David Ortiz‘s alleged failed drug test was not. Ortiz is a great ambassador of the game and now a three-time world champion. Manny was outspoken and crazy, Bonds a narcissist who tainted records and A-Rod a present day thorn in the side.

The failed drug test is less about A-Rod’s continued wrongdoings and more about MLB’s continued control of the narrative.