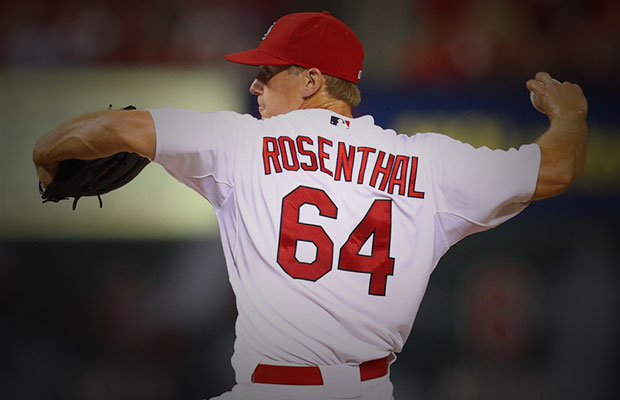 Despite posting a .134/.190/.175 batting line through the first four games of the NLCS, the St. Louis Cardinals have a 3-1 series lead on the Los Angeles Dodgers. Their bullpen has played a large role in the series. They have surrendered just one run in 14 innings, with 13 strikeouts.

Rookie Carlos Martinez and second-year man Trevor Rosenthal have provided more than half of these innings, without surrendering a run. These two flamethrowers have kicked it up a notch this postseason. Each pitcher averaged right around 97 miles per hour during the regular season, Rosenthal at 97.3, and Martinez at 97.6.

Not surprisingly, hitters are having trouble making contact. Rosenthal and Martinez are each getting a significantly higher rate of whiffs per swing this postseason than during the regular season. Their leaning heavily on the fastball, and hitters are coming up empty.

This is the time of year when pitchers are supposed to be getting tired. After all, isn’t that what happened to former Cardinals closer Edward Mujica? Rosenthal and Martinez are showing no signs of tiring. Whether it’s adrenaline or something else, these two young hurlers are getting stronger as we go further into October.

With Jason Motte and Mitchell Boggs being sideline with injuries, and Mujica struggling mightily in September, Rosenthal is the Cardinals third closer. He was probably their best reliever going into the season, but this is a very deep bullpen.

It’s a luxury the Cardinals have that perhaps no other team does. The Detroit Tigers have struggled with their relief pitching the whole year, and it imploded Sunday night. On the other hand, the Cardinals set aside three of their top relief options, and simply reach deeper into their pockets and come up with more dominant flamethrowers.