Can Vidal Nuno Crack the Yankees Rotation in 2014? 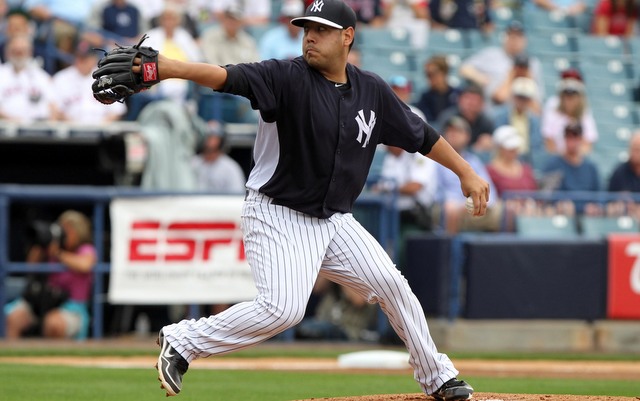 Vidal Nuno is a survivor. The 26 year-old lefthander out of NAIA Baker University was drafted in the 48th round by the Cleveland Indians back in 2009, becoming the first player drafted from his alma mater. Most players selected that late are out of affiliated baseball within a couple years.

Nuno himself was released by the Indians in 2011 after two unspectacular seasons. After pitching six games for the Washington Wild Things of the independent Frontier League, he was signed by the New York Yankees.

Following a strong 2012, Nuno earned a spring training invite. While he did not make the big league club out of spring training, he would make his MLB debut on April 27th. Nuno moved between Scranton Wilkes-Barre and the Yankees, and threw 20 innings with three starts and a 2.25 ERA before a groin injury ended his season.

With the Yankees losing Andy Pettitte to retirement, and Phil Hughes and possibly Hiroki Kuroda leaving via free agency, at least two rotation spots will open up. The Yankees and their fans have to wonder if Nuno can fill one of these spots in 2014.

The 5’11, 195 lb hurler features four pitches, all of which he can throw for strikes. He has excellent control, as shown by his career minor league walk rate of 4.7%. Nuno does not possess the dynamic stuff that his 23.7% career minor league strikeout rate might suggest. Working from a three-quarters delivery, he features a fastball at 86-89, a slider at 79-83, a curveball at 73-77, and a changeup at 80-82. The fastball is not overpowering, and doesn’t show much sink.

Nuno relies heavily on his offspeed pitches. He has the most confidence in his slider, but also throws a curveball, and occasionally mixes in a changeup. The slider is less likely to fool major league hitters, and as it doesn’t show two-plane break, it won’t generate too many whiffs. The curveball is more of a pitch to mix in and get a called strike, but when I saw Nuno, hitters tended to make solid contact with it when they did swing.

Overall, Nuno’s stuff doesn’t project to generate many whiffs at the major league level. This assessment is borne out in Nuno’s limited big league innings. Of the 492 pitchers that have thrown at least twenty innings this year, only two of them have a lower swinging strike rate than Nuno’s 4.1%.

As a shorter pitcher who doesn’t create a downward plane, Nuno is a flyball pitcher. According to Minor League Central, his minor league groundball rate is only 37.5%. With Yankee Stadium being one of the most homerun friendly parks in the majors, this is not a good combination, as fans who have seen too much of Phil Hughes can attest. Combine that with a lack of strikeout stuff, and Nuno is certain to give up plenty of longballs.

His future is more likely that of a middle reliever or lefty matchup guy than a starter. Then again, maybe I shouldn’t bet against a guy who worked himself into the big leagues only two years after the Indians thought he had burned out in A-ball.

Ethereum Trading Down 17.8% Over Last 7 Days