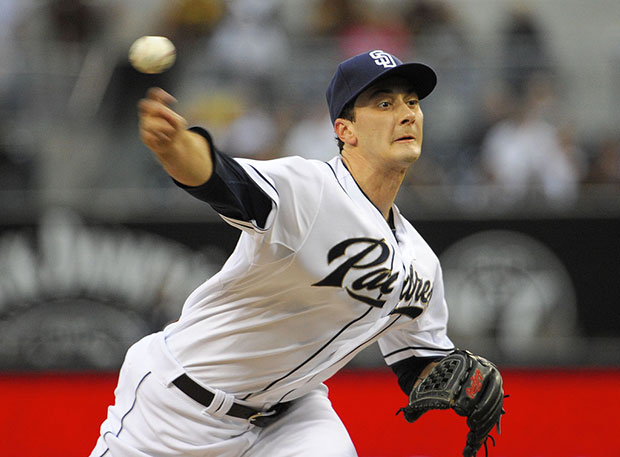 Burch Smith was selected in the 14th round by the San Diego Padres in 2011. The big righthander from the University of Oklahoma had previously attended Howard Community College. Before being selected by the Padres, Smith was drafted in the 49th round by the Cleveland Indians in 2009, and again by the Indians in the 20th round in 2010, but declined to sign.

The 23 year-old has risen quickly through the minor league ranks. When he made his major league debut this year in a May 11 start, he became the first player from the 2011 14th round to reach the majors. In fact, no other player drafted in that round has moved past Double-A, and eight players have been released. Smith has thrown 30.2 innings for the big league club in 9 games and 6 starts, with a 5.87 ERA.

Despite his struggles at the big league level, Smith has shown promise, and he has two pitches that can be very good. The 6’4, 215 lb. hurler has gained velocity since he was drafted, and his fastball now sits in the 91-94 range, and occasionally climbs up to 96-98. His changeup is his preferred secondary pitch, and at 79-83, it has excellent depth and fade.

The separation from his fastball has been conducive to getting whiffs. He also features a loopy curveball at 74-76, which will have to improve significantly to become a featured pitch. Of the 71 times he has thrown it this year, it has produced only three whiffs.

Smith uses a drop-and-drive delivery, with a three-quarters arm slot. Because of the low arm slot, he tends to pitch up in the zone. As a result, only 29.8% of batted balls have come on the ground, an extremely low rate.

Unsurprisingly given his rapid ascension through the minors, his approach is very raw, and he has relied more on stuff than command. In the minors, Smith’s tendency to pitch up in the zone was very effective, as many hitters could not catch up to his fastball. By being aggressive up in the zone, Smith has produced a 9.8 K/9 and a 2.1 BB/9 against minor league competition.

Doubts regarding the ability of Smith’s pitching style to translate against major league hitters have been at least partially confirmed, as he has surrendered six longballs in his limited time. While he is still striking out major league hitters at the rate of 11.2 K/9, his control has not been as good, as shown by his 5.3 BB/9.

Even with these flaws, Smith is an interesting prospect. The quality of Smith’s fastball and changeup are revealed by his propensity to miss bats. In his 25.1 innings as a starting pitcher, Smith has generated a swinging strike rate of 13.6%, second only to Danny Salazar.

While gettings swings-and-misses is vital, there is more to pitching. Smith is likely to be plagued by the longball unless he develops a third pitch or learns to pitch down in the zone more frequently, not an easy task with his three-quarters delivery. If he can do so, Smith could be a solid 3/4 starter. If not, expect his fastball/changeup combination to see time in the bullpen, where he can air it out.