Who Will Be Better Long Term: Wil Myers or Yasiel Puig? 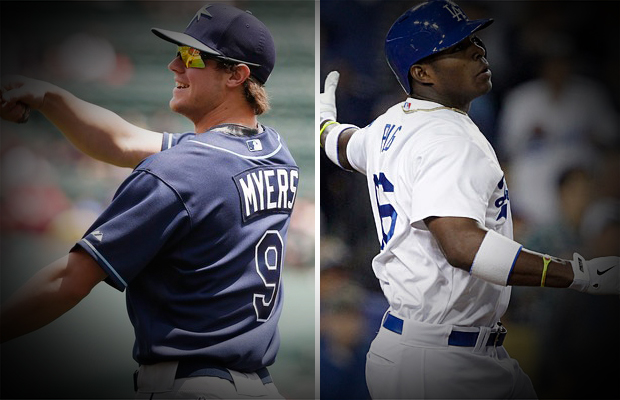 His June was so fruitful that the import, who signed a seven-year, $42 million contract in 2012, was almost elected to the All-Star Game.

Puig has since cooled off, posting a .303 batting average, .791 OPS and two home runs so far in July, but critics expect him to become an elite major league hitter. And, as for his defense, he’s already impressed Dodgers’ long-time announcer Vin Scully.

In the midst of all the Puig hoopla, however, baseball fans might have missed the better young hitter: Wil Myers. The Tampa Bay Rays’ acquired Myers in the offseason, when they sent ace pitcher James Shields to the Kansas City Royals.

The Rays strategically kept Myers at Triple-A for service clock purposes, but recalled the top outfield prospect on June 18—immediately inserting him in right field.

The 22-year-old Myers hasn’t been as flashy as Puig, posting a .322 batting average, park-adjusted 136 OPS+ and five home runs over 131 plate appearances, but he has still been the better actual hitter.

While neither Puig nor Myers has exhibited great walk skills, posting a 4.7 percent and 5.3 percent walk rate, respectively, the latter has a more advanced approach.

Myers has swung at at 9.6% less pitches outside the zone than Puig, but has also made contact with 8.1% more of those pitches. In fact, across the boards, Myers boasts the better patience peripherals.

Perhaps the most foreshadowing metric is the pair’s Zone%, which tracks the amount of pitches a hitter sees inside the strike zone. While Myers has forced opposing pitchers to throw him strikes (51.4%), the same cannot be said for Puig.

Pitchers have quickly adapted to Puig’s free-swinging ways, just throwing him 37.6% pitches inside the zone. Considering Puig can’t lay off a ball, there’s little reason for a pitcher feed him strikes.

Unless Puig can learn better plate discipline, he’ll have to bank on unsustainably high O-Contact% rates to put balls in play. In the meantime, Myers appears to be the more polished hitter between the two.