D-Backs Kirk Gibson on Heath Bell: “He’s Going to be Our Closer 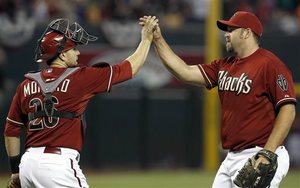 Some managers like to take the proactive approach when it comes to struggling closer  and sit them down to sort out their troubles, like Boston Red Sox manager John Farrell did recently with Andrew Bailey.

The  Detroit Tigers had no problem letting go of old Jose Valverde who was designated for assignment late last week.

Pretty much the way it is, he’s going to be our closer,” D-backs manager Kirk Gibson said. “We want to get him turned around.”

Bell has had a rough stretch giving up a home run for the fifth straight outing on Saturday and after working his ERA down to 3.28,  it is back up to 5.02. His latest meltdown occurred against the Cincinnati Reds when he gave up a two run homer to Jay Bruce and the ninth-inning.  Things might be different  if that weren’t his first blown save opportunity since May 12.

Bell had converted nine straight save opportunities before that,  but the writing was on the wall, having  given  up a combined seven runs in four innings over his last five appearances.

J.J. Putz is scheduled for a rehab appearance at Triple-A Reno this week and Bell  may be just keeping the seat warm  until he returns. Stay tuned  closer situations seem to take on a life of their own.  Affirmation one day  can quickly turn to condemnation.

$84.63 Million in Sales Expected for Guardant Health, Inc. This Quarter