Aramis Ramirez to the Blue Jays? It Could Happen 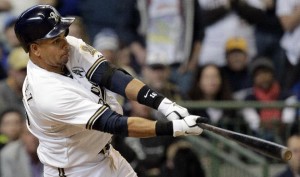 Aramis Ramirez is 35-years-old and brings with him a career impact bat. Of course, his Milwaukee Brewers are 12 games under .500, in the toughest division for clinching a playoff spot in baseball and Ramirez has two potential years left on a manageable contract if he can demonstrate he is healthy.

With the trade deadline looming a month from now, Ramirez and his 3.9 WAR could find itself in a new setting, one which would have to be able to afford a $16 million dollar tab in 2014 and a $15 million dollar option (or $4 million buyout) in 2015.

Ramirez is an option for a team who is either contending now and in need of an impact bat or feels it will be very close to contention and having three potential years on a contract could make Ramirez extremely desirable.

Of course, Ramirez will be 37 when his contract expires and he is presently hitting: .274/.355 with 4 HR and 21 RBI in just 146 AB, a season lost mostly to injuries until recently.

Ramirez to the  Toronto Blue Jays could make a lot of sense. Toronto is finally hitting on all cylinders, presently in the midst of an 11 game winning streak, and the boost of Jose Reyes‘ return from injury and Ramirez replacing the anemic Maizier Izturis could be the boost which puts Toronto over the top in the AL East.

The Los Angeles Angels and  Arizona Diamondbacks would appear to represent competition as well as the Indians and White Sox, who may feel they can compete as early as next year. The Yankees, a popular choice with Kevin Youkilis likely to miss the season and Rodriguez a career question mark, are unlikely to take on an additional $16 million dollars at third base, even if Aramis can be a DH in a weak-hitting lineup.

Flexacoin Trading Down 3.1% Over Last 7 Days

SEI Investments Given Consensus Recommendation of “Hold” by Brokerages