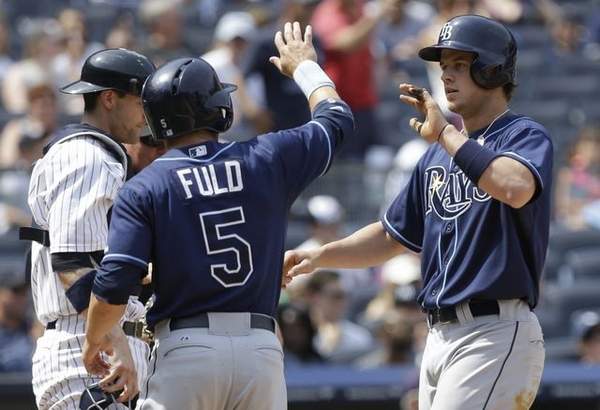 Saturday was highlighted by late-inning comebacks and walkoff victories, as well as big-time home run shots.

In particular, one of those shots was by Rays top prospect Wil Myers, who launched his first career home run against the Yankees, a grand slam off of New York ace CC Sabathia.

Detroit’s Victor Martinez slugged a grand slam of his own in the Tigers’ 10-3 rout of the Red Sox, while Cincinnati slugger Jay Bruce launched two home runs, increasing his season tally to 18.

Below are the recaps and highlights of today’s major league games.

Boston 3, Detroit 10
Max Scherzer gave up two early runs in the first, but buckled down to pitch six straight scoreless innings en route to his 11th victory of the season. Scherzer now boasts a perfect 11-0 record and has struck out at least six batters in each of his 15 starts this season. Detroit came out swinging on Saturday, led by a first inning grand slam by Victor Martinez, who finished the evening with five RBI.

Minnesota 7, Cleveland 8
After trailing 8-2 coming into the seventh, the Twins responded with five runs in the last three frames, led by home runs by Chris Parmelee in the eighth and ninth innings. Despite the late rally, the Indians would hold on for the victory and grab their fourth straight win.

Chicago 3, Kansas City 2
Following a Salvador Perez single in the sixth, the game would remained tied 2-2 until the top of the ninth when Alejandro De Aza hit a sacrifice fly to right field, scoring Jordan Danks and giving the White Sox the go-ahead 3-2 lead. Addison Reed would enter the game in the bottom of the frame, closing out the game for his 21st save of the season.

Baltimore 2, Toronto 4
A solo bomb by Taylor Teagarden in the top of the eighth tied the game 2-2; however, a two-run shot by Jose Bautista in the bottom of the frame gave the Blue Jays a 4-2 lead and the eventual victory. With the win, Toronto extends their winning streak to 10 games and move above the .500 mark with a 37-36 record on the season.

Tampa Bay 5, New York 7
Rays’ top prospect Wil Myers slugged his first career home run in the sixth inning, a grand slam off of C.C. Sabbathia to give the Rays a 5-3 lead. However, the Yankees would respond in the bottom of the seventh with four runs, highlighted by a three-run ground rule double by Vernon Wells.

Pittsburgh 6, Los Angeles 1
Pittsburgh brought their bats to Anaheim on Saturday, as Pedro Alvarez, Andrew McCutchen, and Gaby Sanchez each launched a solo shot to lead the Pirates in a 6-1 victory over the Angels.

Texas 4, St. Louis 2
Texas struck early with a pair of two-run shots by A.J. Pierzynski and Nelson Cruz in the third and fourth innings, respectively. A strong start by Martin Perez, in which he went seven innings and surrendered two runs on five hits, and a shut down performance by bullpen ringers Tanner Scheppers and Joe Nathan helped cement a 4-2 victory for the Rangers on Saturday.

Cincinnati 3, Arizona 4
Cincinnati slugger Jay Bruce accounted for all three of the Reds’ runs on Saturday, launching two home runs on the afternoon, a solo shot in the second and a two-run bomb in the ninth to give the Reds a 3-2 lead at the time. However, the Reds’ rally would be spoiled by Jason Kubel‘s two-run single in the bottom of the ninth, scoring both Paul Goldschmidt and Miguel Montero for the walk-off win.

Atlanta 0, Milwaukee 2
Aside from RBI singles by Milwaukee’s Juan Francisco and Aramis Ramirez, the game was devoid of much offensive production, as Francisco Rodriguez closed out the game for his 300th career save (and sixth of the season).

Miami 1, San Francisco 2
Miami’s Jacob Turner and San Francisco’s Barry Zito each turned in seven inning, one-run outings for their respective teams; however, a Hector Sanchez RBI single in the bottom of the 11th inning would seal the deal for the Giants, as they took the contest by a score of 2-1.

New York 7, Philadelphia 8
After trailing the Phillies 7-1 heading into the seventh, the Mets responded with a four-run rally. A Jordany Valdespin solo shot and Daniel Murphy RBI single in the ninth would tie the game at 7-7, but a Kyle Frandsen solo homer in the bottom of the ninth would give the Phillies an 8-7 walkoff victory.

Houston 4, Chicago 3
A three-run shot by J.D. Martinez in the sixth allowed the Astros to tie the game at 3-3, wherein a Ronny Cedeno sacrifice hit to Chicago reliever Kevin Gregg in the top of the ninth gave Houston the go-ahead lead heading into the bottom of the frame.

Colorado 7, Washington 1
Jhoulys Chacin was masterful for the Rockies on Satuday, working seven scoreless innings and earning his sixth victory of the season. On the mound for the Nationals was Dan Haren, who continued his season-long struggles by surrendering six runs over 3 1/3 innings, earning his ninth loss of the season and raising his ERA to 6.15.