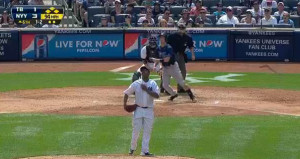 Tampa Bay Rays right fielder Wil Myers was called up to be  provide power and be a run producer in the middle of the lineup.  Myers hit his first home run in the major leagues against the CC Sabathia of the New York Yankees today, a grand slam.

Sam Fuld  led off the top of the sixth inning with a walk and Desmond Jennings followed with a double.  Sean Rodriguez struck out and Ben Zobrist  popped out to first baseman Lyle Overbay.

That would bring Rays slugger Evan Longoria to the plate with first base open.  Longoria had homered earlier in the game.  The Yankees intentionally walked Longoria to get to Myers.

With count in his favor, 1-2 Myers launched a shot to right centerfield , that hit the top of the fence and center-fielder  Brett Gardner‘s glove  for the grand slams.