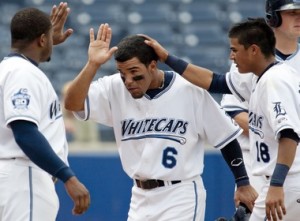 Devon Travis, Detroit Tigers prospect with the Class-A West Michigan Whitecaps, was named the MVP of the Midwest League All Star Game on Tuesday, leading the Eastern Division squad to a 6-5 victory over the Western Division at Fifth Third Field in Dayton, Ohio (home of the Dayton Reds).

Travis would go 2-for-2 with a three-run triple in the game, which he hit with the bases loaded in the bottom of the fifth inning, leading the East squad to an eventual 6-5 victory.

A 13th round draft pick by the Tigers in the 2012 MLB Amateur Draft out of Florida State University, Travis has a successful first two seasons in professional ball in the Tigers organization.

In all, the game featured 19 hits between both teams, only three of which were extra-base hits. It would be one of those extra base-hits that would decide the contest, as Davis ripped his three-run triple to bring home the victory for the Eastern Division squad.

$0.92 EPS Expected for The Timken Company This Quarter