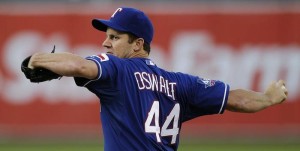 The Colorado Rockies have officially announced that Roy Oswalt will start on Thursday against the Washington Nationals, marking the 2013 season debut for Oswalt.

After signing a minor league contract with Colorado on May 2, Oswalt has been dominant in his time at Double-A Tulsa. In five starts with the Tulsa Drillers, Oswalt has posted a 3-2 record and 2.16 ERA along with a 25/7 strikeout to walk ratio in 33 1/3 innings of work.

In his most recent start on June 14, Oswalt went 8 1/3 scoreless innings, surrendering five hits and striking out seven batters while walking just one in a 9-1 victory for Tulsa.

After an injury-marred season for the Texas Rangers last year, in which he posted a 5.80 ERA in 17 games (nine of which were starts, as the Rangers relegated Oswalt to bullpen duty towards the end of the season) Oswalt was left without a job following the 2012 season, holding onto free agent status throughout spring training and the start of the season before signing with Colorado in early-May.