Its Win or Go Home in UNC vs. LSU CWS Match-Up 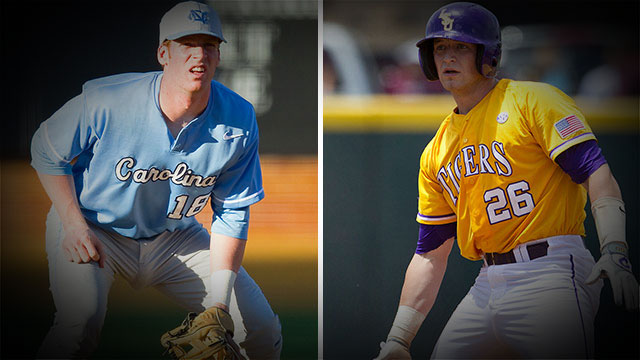 Something has to give today in the College World Series matchup of  The University of North Carolina vs. .Louisiana State University.  Both teams were pre-tournament favorites  and have 114 games between them. North Carolina has not lost back-to-back games all season.

LSU has done so only once against South Carolina in late April. Despite all the accomplishments  between the two teams, one of the  perennial baseball powerhouses will be leaving Omaha without a win.

“It’s what you have in this tournament — nothing but great teams, and there’s little margin for error,” LSU coach Paul Mainieri said. “We just have to go back to playing good, fundamental baseball and play better on Tuesday.”

North Carolina fell victim to Carlos Rodon and North Carolina State in their opening round game on Sunday.  The Tar Heels looked outmatched in all areas on Sunday afternoon, dropping the Day Two opener 8-1 to their in-state rivals.

Freshman Trent Thornton will get to start for North Carolina.  Thus far in the NCAA Tournament, Thornton has a 1.20 ERA in 15 innings pitched.

North Carolina will be looking for offense and features six hitters in their lineup that hit over .300, including junior Colin Moran .340, freshman Landon Lassiter .360 and freshman Skye Bolt .323.

Similarly LSU  ran into the stingy pitching of Aaron Nola and the LSU Tigers. Critical defensive miscues proved to be the nail in the coffin for LSU down the stretch, but the Tigers hope to improve their performance today.

LSU will send left-hander Cody Glenn to the mound who is 7-2  with an ERA of 2.41 across 82 innings of work this season

“I have a lot of respect for North Carolina,” said  LSU coach Paul Mainieri. “They have a lot of great players and coaches. They have six left-handers in their lineup and they are.

Two great programs but only one gets to go on in the College World Series. Who is your pick? We will have live updates throughout the afternoon so be sure to check back.