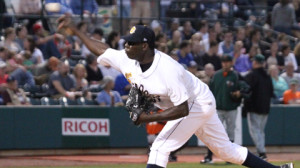 New York Yankees prospect Rafael DePaula  is being promoted to high Class a Tampa,  after dominating hitters in the low Class A South Atlantic League.  DePaula pitched to a 2.94 ERA with 96 strikeouts over 64 1/3 innings over 13 starts for Charleston.

DePaula currently ranks fourth in the minor leagues in strikeouts and is only two behind minor league leader Daniel Winkler  of the Rockies and has faced 66 fewer hitters.

DePaula, 22,  has been dominating  hitters with a mid-90s fastball in the SAL so the promotion is somewhat overdue. Competition in the Florida State League will provide a better test for the young right-hander.

DePaula was signed to a $500,000 deal in 2010  But was unable to obtain a work visa because of previously lying about his identity and made his debut in the Dominican Summer League last year.  Heading into the 2013 season he ranked as the Yankees organization number 10 prospect.