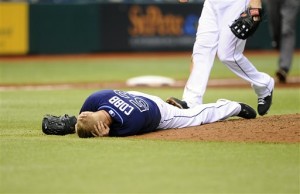 Tampa Bay Rays right-hander Alex Cobb was hit on the right ear by a line drive off the bat of Kansas City’s Eric Hosmer in the fifth inning of Saturday’s game.

Cobb was taken off the field on a stretcher. The ball left Hosmer’s bat at 102.4 mph before striking the pitcher, Sun Sports reported.

The sound of the ball striking Cobb, which sounded like a bat hitting a ball, could be heard in the press box

This is the second time an incident like this has occurred at Tropicana Field this season. Earlier this season Toronto’s A.J. Happ was struck with a pitch off the bat of Desmond Jennings.

Cobb  was taken to Bayfront Medical Center, where he was diagnosed with a mild concussion and all tests were normal, the Rays said. He is scheduled to have further evaluations.