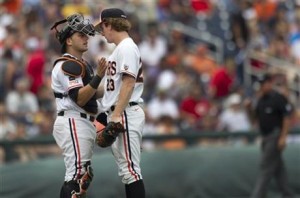 A competitive showdown from the start, the opening game of the College World Series between the Mississippi State Bulldogs and the Oregon State Beavers would result in a 5-4 victory for the Bulldogs, capped by a two-run go-ahead eighth inning.

Coming into the opening round in Omaha, both teams posted a 5-1 record throughout regional and super regional play, showcasing offensive mite by outscoring their opponents by a combined score of 51-42.

Both teams faced tough competition in their respective super regionals, as Mississippi State faced the number six ranked Virginia while Oregon State matched up against the hot-hitting Kansas State, who forced a third game in a competitive Corvallis Super Regional.

The Beavers would strike first on Saturday, as Michael Conforto would rip a double to deep center field that would score Tyler Smith, which would be followed by a Danny Hayes RBI single that scored Conforto, giving Oregon State an early 2-0 lead.

However, the Bulldogs would counter in the top of the second with a three-run rally, led by RBI singles by Sam Frost and Demarcus Henderson (Nick Ammirati would score on the single by Henderson due to an errant throw by Oregon State right fielder Dylan Davis).

Oregon State would score in the fourth and fifth innings, highlighted by a Kavin Keyes RBI triple in the fourth, which would have the Beavers leading 4-3 heading into the eighth.

Beavers freshman starter Andrew Moore was able to settle down after the second inning, retiring 17 of his final 20 batters. Moore appeared to possess great poise and mound presence following miscues in the second, going on to pitch a solid game, wherein he was able to locate his fastball and changeup across the plate and with good movement.

After surrendering a base hit to Alex Detz with one out in the eighth, Moore was replaced by staff ace Matt Boyd, making his second relief appearance of the postseason after closing out game three of the Corvallis Super Regional.

Boyd would surrender an infield single to Hunter Renfroe, followed by a strikeout of Brett Pirtle; however, the physically-imposing Wes Rea ripped a two-run double to right center, giving the Bulldogs a 5-4 go-ahead lead.

Bulldogs closer Jonathan Holder would enter the game in the bottom of the eighth with two runners aboard, forcing Jake Rodgriguez to fly out and striking out Joey Jansen to end the Beavers’ threat.

A Tyler Smith single and a walk drawn by Conforto would set up a game-winning situation for the Beavers in the bottom of the ninth, however, Holder would punch out Dylan Davis and get Danny Hayes to fly out to end the game (Hayes’ fly out to deep right barely stayed in TD Ameritrade Park, as Renfroe caught the ball at the back-end of the warning track).

Mississippi State will go on to face the winner of tonight’s match-up between Indiana and Louisville on Monday (7:00 PM), while Oregon State will face the loser of that game in the loser’s bracket game on Monday (3:00 PM).