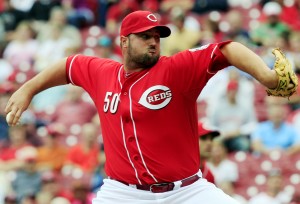 The Cincinnati Reds placed setup man, Jonathan Broxton, on the DL with a right elbow flexor strain. Broxton’s stint is retroactive to June 14th  and it is unclear at this time whether he will be back by his eligible return date.

With the move, the Reds’ bullpen is a little thinner for the time being but Broxton had struggled of late, likely due to the injury.

Cincinnati has World Series aspirations again this season and are currently 2.5 games behind the division leading Cardinals for the top record in the National League. The Reds were defeated in the NLDS by the Giants last season, blowing a 2-0 series lead to the eventual World Series champions.

With Aroldis Chapman once again in the fold as a dominant closer, Broxton was acquired to add some stability to the eighth inning. Until recently, the former closer performed well, but heads to the DL with a 4.33 ERA, 1.30 WHIP and 20/11 K to BB ratio through 27 innings.

With the move, the Reds have called up right-handed reliever, Pedro Villarreal from AAA Columbus. The 25-year-old callup had pitched in one game in each of the last two seasons for Cincinnati and figures to perform a little more than that this year with his spot in the bullpen to provide depth. In 12 starts for Columbus, Villareal has been mediocre, posting a 5.11 ERA and will be viewed as a long-man for the time being.