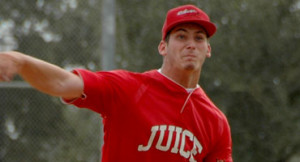 The Chicago White Sox have reached an agreement with second-round pick Tyler Danish. The Durant High School ( Fla. ) graduate will receive a bonus of $1,001,800.

Danish who had committed to the University of Florida will report to Bristol of the Appalachian League.

Danish 55th overall pick in the MLB draft s coming off one of the most impressive prep seasons in recent memory, going 15-1 with a 0.00 ERA and 156 strikeouts over 94 innings.

Earlier this week the White Sox signed Tim Anderson the number 17 pick in the draft to a $2.164 million bonus. Anderson, 19, hit .495 with 62 runs scored and 41 stolen bases for East Central Community College and was named an NJCAA Division II All-American.