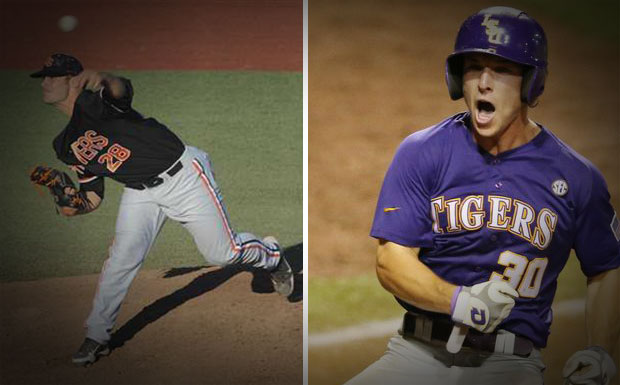 As the 2013 College World Series commences in Omaha, Nebraska on Saturday, the time is now upon us where we will bear witness to analyses, critiques, predictions, projections, and previews of both the teams and their respective match-ups for the road ahead.

Although the road through Omaha has not quite begun, we are still able to predict the two teams that have the potential to reach the best of three championship series. And based on what we have seen throughout the regular season and the initial weeks of the NCAA Tournament, two definitive teams have stood out from the rest of the field.

Both teams have put on offensive and pitching clinics throughout regional and super regional play, boasting premier lineups and starting rotations that are considered to be one of, if not the best in college baseball.

LSU swept their competition in the Baton Rouge Regional, breezing through the likes of Jackson State and LA-Lafayette with relative ease. However, it would be the Tigers’ dominating performance in the Baton Rouge Super Regional that has solidified their reputation as a favorite to capture the title in Omaha. Staff ace Aaron Nola turned in a masterful performance for the Tigers in game one, pitching a complete-game shutout and out-dueling Oklahoma ace Jonathan Gray in a 2-0 victory.

The Tigers would follow up with an 11-1 rout of the Sooners in game two, ousting Oklahoma from the tournament and advancing to their 16th College World Series in school history.

The 1-2 pitching punch of Aaron Nola and Ryan Eades is amongst the best in all of college baseball, as the two starters have helped win 20 of a team-record 57 victories this season for the Tigers. In 16 starts this season, Nola has posted a 12-0 record and 1.68 ERA along with a 117/17 strikeout to walk ratio in 118.0 innings of work.

Nola has emerged as one of the top starting pitchers in college this spring and along with NC State ace Carlos Rodon should be amongst the top pitching prospects available in the 2014 MLB Amateur Draft. Nola has a plus fastball that sits anywhere between 90 and 95 MPH which he varies in terms of speed quite well.

His overall pitch arsenal is relatively diverse, comprised of a solid breaking ball combination that he commands with great control. The right hander likes to keep the ball low and can overwhelm hitters with his quick pace of game (which compliments his pitch variation).

Eades has performed solidly as the Tigers’ number two starter, posting an 8-1 record and 2.79 ERA in 100.0 innings of work. Eades is a power thrower and tends to deliver each of his pitches hard, boasting a powerful breaking ball and changeup combo that he can paint all over the plate with ease. Last week, Eades was selected by the Minnesota Twins in the second round of the 2013 First-Year Player Draft.

Rhymes boasts a .343 batting average and has clubbed 84 hits, Katz has batted .366 with a team leading 15 home runs and 68 RBI, and Bregman has batted .380 with 104 hits and 52 RBI, impressive numbers for which he was named by Collegiate Baseball as the National Freshman Player of the Year.

As for Oregon State, their offensive prowess is every bit of impressive. Unlike the LSU lineup that is comprised of young, underclassman talent, the Beavers boast a more veteran lineup led by Kavin Keyes, Andy Peterson, and Jake Rodriguez. However, the sophomore duo of Dylan Davis and Michael Conforto have emerged as the offensive firepower that has driven this team to a 48-10 record this season. Davis leads the team with a .343 batting average and possesses a quick, powerful bat that can line the ball to all parts of the field. Conforto is a big-time slugger and is a dangerous threat to break the game open with one swing of the bat at any given time, leading the team with 11 home runs.

However, the bread and butter for this Oregon State team has been their starting pitching, particularly the 1-2-3 punch of Matt Boyd, Andrew Moore, and Ben Wetzler. The three starters have combined to win 33 of the Beavers’ 48 victories this season and come into the College World Series considered to be the best starting rotation.

Both teams will face solid competition in their respective brackets, as LSU will face off against the UCLA Bruins while the Beavers will face the Mississippi State Bulldogs to open up play in Omaha. Teams that may pose a serious challenge to LSU include NC State, who possesses a hot-hitting lineup and a solid pitching arsenal, while Oregon State may face a challenge in Indiana, who has come on strong as of late with an all-around strong roster that dominated opponents in regional play and steam-rolled over perennial contender Florida State in the Tallahassee Super Regional.

Nonetheless, the LSU Tigers and Oregon State Beavers remain the most complete and talented teams in the College World Series this year. As the College World Series commences this Saturday, both teams begin their journey towards the best of three games championship series, wherein if everything falls into place, we may be witnessing a very possible match-up between the Tigers and Beavers for the 2013 NCAA Championship.