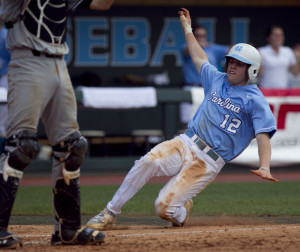 Finally, the North Carolina Tar Heels secured the final berth in the 2013 College World Series with a 5-4 win over the South Carolina Gamecocks. This marks the Tar Heels’ 10th appearance to Omaha and its sixth trip in the last eight seasons in search of their first title.

Colin Moran hit an RBI triple in a three-run sixth inning and staff ace Kent Emanuel picked up his first career save by getting the final two outs  In the ninth-inning.