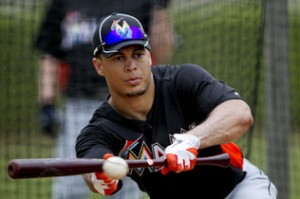 The Miami Marlins have activated Giancarlo Stanton from the 15-day DL, who has been out since late-April with an injured hamstring, and will return to the lineup in Monday night’s game against the Milwaukee Brewers.

Stanton may have been able to return at a sooner date if not for a bout with sore knees two weeks ago, which held back his rehab activities.

Miami has had a miserable season in which they currently boast the worst record in the major leagues at 18-44, good enough for fifth in the NL East standings. The Marlins have struggled offensively this season, posting a .230 team batting average.

To put such struggles in perspective, Juan Pierre leads the team in batting with a paltry .240 batting average and in on-base percentage, a mediocre .294.

Although Stanton posted rather mediocre numbers prior to his injury, he was sent to the DL following a six-game span in which he batted .333 (8-for-24) with three home runs and eight RBI. Prior to this stretch, Stanton went the first 12 games without driving in a run and it wasn’t until April 27 that he belted his first home run of the season.

The Marlins are hoping that Stanton’s return will give the struggling lineup a renewed spark. Miami has won five of their last eight games, following a span in which they lost nine straight.