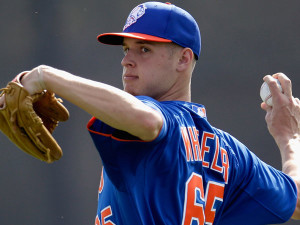 In an interview with WFAN radio on Monday afternoon, New York Mets GM Sandy Alderson hinted that top pitching prospect Zack Wheeler will make his major league debut in a doubleheader game on Tuesday, June 18 against the Milwaukee Brewers.

“There’s been a lot of speculation that he’ll start one game of the doubleheader on June 18,” Alderson said during an appearance on WFAN Monday afternoon. “Unlike most speculation this probably has some accuracy.”

The sixth-overall selection in the 2009 MLB Amateur Draft out of East Pauling HS in Dallas, Georgia by the San Francisco Giants, Wheeler has certainly lived up to his billing as one of the top pitching prospects in baseball.

Wheeler has developed into a complete-pitcher, possessing a powerful arm and a good feel for his diverse pitch arsenal. Wheeler commands a plus fastball that reaches 98 MPH with good movement and sinking action, along with a pair of breaking balls (chanegup and slider) that compliment his power pitching.

In 12 starts at Triple-A Las Vegas this season, Wheeler has posted a 4.14 ERA and 1.349 WHIP. Although mediocre numbers at first glance, Wheeler has displayed the command and pure stuff that suggests he is big league ready.

Las Vegas manager Wally Backman feels that Wheeler is ready to debut at the next level.

“The kid’s ready,” Backman said in late May. “He’s ready to pitch in the big leagues. I personally believe that. His stuff definitely plays. It’s a matter of when the organization feels he’s ready to go there.”

Wheeler has been hailed as a potential front of the rotation fixture for the Mets, a billing that New York hopes will come to fruition, as staff ace Matt Harvey (2.10) is the only starter with an ERA under 4.00 this season. If hints and rumors are valid, Wheeler will make his debut next Tuesday and commence what New York and scouts have predicted to be a successful big league career.