UCLA Advances to CWS in 3-0 Shutout of CSU Fullerton 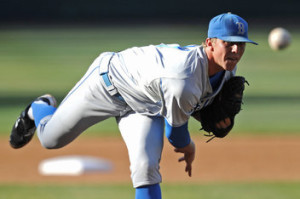 The UCLA Bruins would score all three of their runs in the first inning and would never look back, shutting out the Cal State Fullerton Titans 3-0 and advancing to the College World Series for the second straight year.

After topping the Titans in ten innings on Friday for a game one victory, the Bruins had a much easier go-around in game two. UCLA starting pitcher Nick Vander Tuig went 6 1/3 scoreless innings, surrendering eight hits and striking out four batters while walking none.

The Bruins bullpen would take it from there, working a combined 2 2/3 innings of scoreless baseball, highlighted by David Berg retiring the final five batters (each batter he faced) of the game.

The Bruins opened the game with urgency, as Pat Gallagher ripped a two-out single to center that scored Eric Filia and Pat Valaika. Shane Zeile would follow Gallagher with a RBI single, scoring Kevin Williams and extending the Bruins’ lead 3-0.

Although the Titans were ousted from the NCAA Tournament, game two was closer than one would assume. Aside from the three-run first inning by UCLA, the Titans would out-hit the Bruins 11-3 the rest of the game. The three runs given up by CSU Fullerton starter Thomas Eshelman were all unearned as errors by Carlos Lopez and Matt Chapman would cost the Titans critical outs in the first inning.

Despite the loss, Eshelman pitched a strong game, going eight innings and surrendering no earned runs, while striking out five and walking one.

Nonetheless, the Bruins were able to pull off the victory against the four-time NCAA champion Titans and are en route to their fifth College World Series in school history.