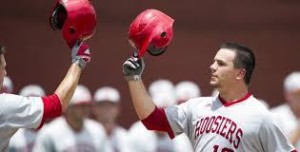 The Indiana Hoosiers advanced to the College World Series with an 11-6  win over the Florida State Seminoles in the Tallahassee Super Regional.

After reaching the Super Regional round for the first time in school history, Indiana now reaches its first CWS. Indiana won game one yesterday 10-9.

Indiana jumped on Florida State pitcher Scott Sitz  for four runs in the first inning, added a single run in the third inning and two more in the fifth to take a 7-5 lead.

Sitz (10-2) lasted 4 1/3 innings giving up seven runs, six earned, he walked to and struck out five. The senior right-hander entered the game with a 1.59 ERA.

Indiana will play the winner of the Super Regional between Louisville and Vanderbilt.  Games from Omaha will begin on June 15th, and the double elimination tourney will wrap up on June 25th or June 26th.