NC State Walks-off With Win over Rice In Super Regional 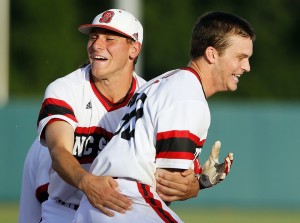 Rice (44-19) took a  3-2 lead going into the bottom of the ninth inning,  but surrendered the lead and lost to NC State 4-3.  Brett Williams singled to start the inning, stole second, and went to third on an error by pitcher Zech Lemond.

Austin Kubitza of Rice and N.C. State’s Carlos Rodon were locked in a pitchers duel for the first seven innings, with each starter allowing two runs before leaving the game. Rodon was removed in the ninth with runners on first and second, setting up Stringer’s go-ahead RBI.

Kubitza gave up five hits and struck out eight before leaving in the eighth with runners on first and second.