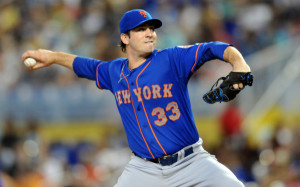 New York Mets ace Matt Harvey left his start against the Miami Marlins today  after throwing 93 pitches in the seventh inning with what was described later as lower back tightness.

Harvey came out to warm up for the eighth-inning when Mets manager Terry Collins and the team trainer  went out to talk to him, and Harvey was removed from the game.

Prior to Saturday’s game, Harvey was 5-0 with a 2.17 ERA and 0.92 WHIP in 83 innings.  Harvey gave up just one run in his seven innings against the Marlins, scattered six hits and struck out six, and failed to record a decision for the fourth consecutive game and eight of his last nine starts.

The Mets are 23-33 on the season and are 11 1/2 games behind division leading  Atlanta in the National League East.