After breezing through their first two games of regional tournament play, the North Carolina Tar Heels and Vanderbilt Commodores (the 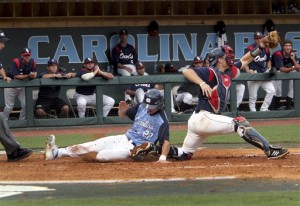 After a 6-3 victory over Canisius on Friday and an 8-5 win against Towson on Saturday, North Carolina appeared to be cruising right along, much like they did throughout much of the regular season.

However, the Tar Heels would hit a wall on Sunday, blowing a 2-0 lead in the seventh inning when Florida Atlantic third baseman Ricky Santiago belted a three-run home run to give the Owls a 3-2 lead and the eventual victory.

The Atlantic Coast Conference champions remain optimistic and are determined to face either South Carolina or Liberty in Super Regionals play.

“This club has pretty much led themselves all year,” UNC coach Mike Fox said. “I trust my team. We’ve got some good leaders in there. I’m sure they’re not very happy. We do have another game to play, so it’ll be up to them and us and everybody to shake this one off and come into the ballpark tomorrow and be ready to play.” 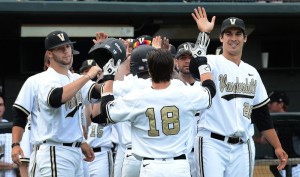 As for the Commodores, Sunday night’s contest resulted in a 5-0 loss to Georgia Tech, only the second time Vanderbilt has been shut out this season.

After cruising through their first two regional contests, a 9-1 victory over East Tennessee State on Friday and a 10-4 win against Illinois on Saturday, Vanderbilt was left baffled on Sunday evening, managing to scrounge up just two hits in a 5-0 loss to Georgia Tech. Georgia Tech starter Josh Heddinger pitched great for the Yellow Jackets, throwing a complete-game shutout (despite surrendering six walks).

Much like the Tar Heels, the Commodores remain unfazed in the wake of last night’s loss.

“It’s lose and go home now,” Vanderbilt catcher Spencer Navin said. “Last year it was the same situation. It didn’t turn out how we wanted it. But we’re going to be ready to go, and the outcome may be a little bit better.”

As Navin stated, “it’s lose and go home.” Each of the other number one seeds, which include Florida State, Indiana, Louisville, North Carolina State, Oregon State and Virginia, advanced to the Super Regionals on Sunday, something the top two national seeds intend on accomplishing on Monday.

North Carolina takes on Florida Atlantic at 6:00 PM, while Vanderbilt takes on Georgia Tech at 7:00 PM to finish off regional tournament play.