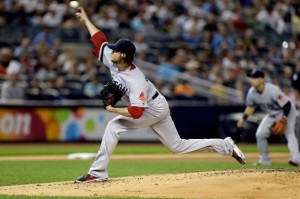 The skies would open up in the sixth inning and after three weather delays, the Boston Red Sox would be declared the victors in a 3-0 victory against the New York Yankees on Sunday night.

Boston was led once again by Clay Buchholz who pitched five scoreless innings, surrendering just two hits while striking out four and walking one. Buchholz was impressive in his 11th start of the season, mixing up his pitches on all counts and baffling batters with his electric pitch movement, avoiding his changeup on account of the small dimensions of Yankee Stadium.

The Red Sox would supply Buchholz with three runs of support, two of such coming off of solo home runs by Jose Iglesias and David Ortiz. Iglesias has feasted on New York pitching this season, going 12-for-22 with a .545 batting average in six games.

Following an 11-1 barrage on Saturday night, Boston would take the three-game series two games to three against New York with its victory on Sunday.

The Red Sox improved to a 35-23 record, increasing their lead to 2 1/2 games over Baltimore in the AL East standings. The Yankees would slip to third in the standings (tied with Tampa Bay), three games back of the Red Sox.