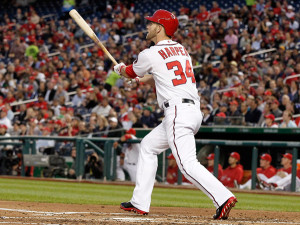 After running into the wall three weeks ago in Los Angeles, slumping thereafter and sitting out the past few games, Washington Nationals outfielder Bryce Harper was finally sent to the disabled list on Saturday.

The 20-year-old outfielder had been trying to battle through an injured left knee but the decision to sideline him was finally made when the swelling in his knee would not subside.

For the Nationals, it’s an injury which may have had an earlier return date had Harper been placed on the DL earlier, but now they will be without their best hitter for 10 additional days at the earliest, if Harper returns at his first eligible date. Harper originally injured himself on May 13th, but has been out of the lineup only since May 26th.

With Jayson Werth due to come back on Tuesday after an extended injury, the Nationals will at least gain an outfielder in the interim.

In total, Harper played nine games after suffering the injury where he hit just .226, though he did hit one home run in that span. The Nationals are already 3-9 since Harper has been sidelined and will now have to wait even longer for his return. Of course, for Werth, it means he is likely to play everyday once he returns. Currently, the Nationals are using: Tyler Moore, Denard Span and Roger Bernadina in the wake of the starting outfielder injuries.