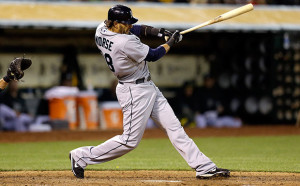 Michael Morse could return to the Mariner’s lineup on Monday, recovering from a strained quadricep which has sidelined him since May 28th. Morse helps to complete a complicated situation in Seattle with a series of moving parts.

Jesus Montero, freshly demoted to AAA in favor of career backup, Kelly Shoppach, recently tore his meniscus in his knee and will be out 4-6 weeks. Even if Montero had caught fire with the bat over the next few weeks, the injury now prevents him from playing into any callup opportunity.

Justin Smoak, the primary starter at the first base position Morse backs up, has been placed on the DL retroactive to May 15th with an oblique strain. While Manager, Eric Wedge was hopeful Smoak would return on Monday, it’s important to note obliques can take upwards of one month to heal, which means Smoak could miss the majority of June.

Seattle may elect to use Michael Saunders in right field and Morse at first for the time being, With Kendrys Morales the full-time DH, or they may slide Morales to first base and keep Ibanez as the DH against lefties, and Morse, Jason Bay and Morales splitting time at DH against righties.

Morales and Ibanez have been hot in the month of may and Jason Bay is coming off of a multi-homerun game on Saturday. Morse should be playing everyday in some capacity and could provide some much needed power if he is finally firing on all cylinders.