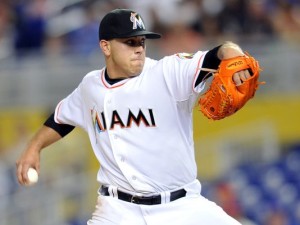 Miami Marlins starter Jose Fernandez did it all for his club on Saturday afternoon, providing offense and superb pitching in an 8-1 victory over the New York Mets.

Fernandez pitched seven scoreless innings, surrendering just three hits and striking out eight batters with one walk. Fernandez was in control of his arsenal, painting the plate nicely with his plus fastball and curveball combination, a pitch (curveball) he has relied heavily upon this season (and subsequently has had much success with).

Coming off of the worst outing of his short career, in which he surrendered seven (four earned) runs in 3.1 innings in a 6-10 loss to the Tampa Bay Rays, Fernandez garnered his third victory of the season and improved to a 3-3 record and 3.34 ERA in 59.1 innings of work over 11 starts.

Offensively, Fernandez went 2-for-3 with an RBI single in the second inning and a double in the seventh (he would later score on a Derek Dietrich two-run single).

The Marlins have now won two straight games after losing their previous nine contests. The victory improved their record to 15-41 on the season, the worst record in the National League.