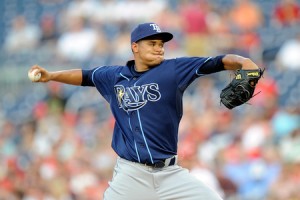 Heading into the weekend series with the Cleveland Indians, the Tampa Bay Rays rotation  continues to evolve and take on a new look. Chris Archer  will be called up to take the place of Alex Cobb who is suffering from a crack along the edge of his fingernail on his middle finger.

Cobb’s  injury allowed Alex Colome to his major league debut on Thursday and pushed Matt Moore‘s start up to Cleveland on Friday. Jeremy Hellickson  will start for Tampa Bay on Sunday.

Meanwhile, Archer will be the third starter over a six-game stretch that has been promoted from Triple-A Durham following Jake Odorizzi and Colome.

“It’s unusual how this has all broke for us, but then again, how unusual is it that you’re able to cover it so well and feel good about it,” Rays manager Joe Maddon said.

Archer  as a 5-3 record with a 3.96 ERA in 10 starts  for Durham.  In the event that Cobb is unable to go on Tuesday  after having Monday off Roberto Hernandez would  get the start.