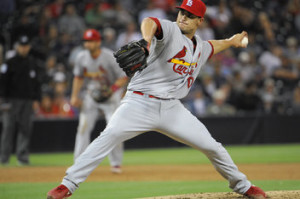 On Tuesday evening, part of that young pitching core was on display as Lyons started his second career game. Lyons would pitch seven strong innings, surrendering just one run on two hits, while striking out five batters and walking one en route to a 4-1 victory against the Kansas City Royals.

Lyons was called up last week in the wake of Jaime Garcia‘s shoulder injury. In his first career start, Lyons pitched seven innings and surrendered just one run on four hits, while striking out four batters and walking one.

The Cardinals rookie was highly efficient in his debut, having thrown only 81 pitches over seven innings.

Lyons was once again efficient on Thursday, throwing 89 pitches in his seven innings of work. At one point, Lyons reitred 17 batters in a row before surrendering a base hit to Billy Butler in the seventh inning.

Carlos Beltran led the offensive charge for the Cardinals, launching a two-run home run to right field in the first inning off of Royals starter Ervin Santana.

The Cardinals improved to a 34-17 record on the season, the best record in the National League, and maintain a 1.5 game lead over the Cincinnati Reds in the NL Central standings.