Posted by Joshua Vadeboncoeur on May 23rd, 2013 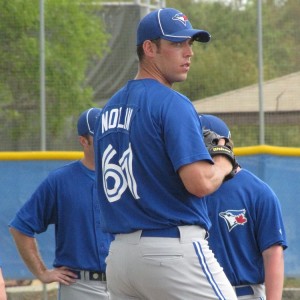 Sean Nolin, top pitching prospect for the Toronto Blue Jays, has been called up and will be making his major league debut on Friday against the Baltimore Orioles.

After being drafted in the sixth-round of the 2010 MLB Amateur Draft out of San Jacinto College, Nolin has ascended the Toronto farm system with much success over the past three seasons.

Following a 2012 season that saw the young Toronto southpaw post a perfect 10-0 record and 2.04 ERA, along with a 108/27 strikeout to walk ratio in 101.1 innings split between Class A Dunedin and Double-A New Hampshire, Nolin has been dominant in three starts this season for New Hampshire.

In those three starts, Nolin has posted a 2-0 record with a 1.17 ERA and a 16/5 strikeout to walk ratio in 15.1 innings of work. In his most recent start on Saturday, Nolin worked six scoreless innings and struck out five batters en route to this second win of the season.

Nolin boasts a solid four-pitch arsenal, which consists of a fastball that he commands and locates exceptionally well and a set of breaking balls (slider and curveball) that he has developed into out-pitches with solid command.

Nolin joins a Toronto starting rotation that has struggled this season, contributing to a team ERA of 4.76, second worst in the American League this season.