Posted by Joshua Vadeboncoeur on May 22nd, 2013 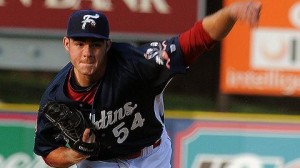 The local son of Philadelphia, Jesse Biddle, has pitched his way to become the top-ranked prospect in the Philadelphia Phillies organization and one of the top pitching prospects in professional baseball.

With the recent struggles and possible decline of Phillies ace Roy Halladay, Philadelphia has been in the process of grooming their potential torch-bearer for the starting pitching rotation of the future, but according to GM Rueben Amaro his time is not near, “He’s a very young kid and he’s not ready for the big leagues — period,” Amaro said.

Selected by the Phillies in the first-round (27th overall) of the 2010 MLB Amateur Draft out of Germantown Friends High School in Philadelphia, has ascended the levels of the Philadelphia farm system over the past three seasons, currently anchoring the rotation at Double-A Reading.

A prototypical pitcher’s frame (6-4, 225), Biddle has good athleticism and strength, which bodes well for a commanding physical presence on the mound. Biddle owns a smooth delivery highlighted by good balance and extension, allowing for easy projection and sound mechanics.

Biddle has a diverse arsenal of pitch offerings that he utilizes with plus command and control, a broad projection that may allow for Biddle to become a solid middle of the rotation fixture. Biddle boasts a low-90s fastball that can peak in the mid-90s, which has good natural movement and life. While he is not a flamethrower by any stretch, Biddle is able to get good angles and explosiveness on his fastball due to his size and sound delivery.

Along with his fastball, Biddle is able to throw strikes consistently with a quality changeup. Biddle is able to effectively alter pitch speed and deceive batters with his delivery/arm speed, which allows for his changeup to pick up great fade. While his slider is a relatively new pitch, Biddle has utilized it more often this season, working it into counts as a “show-me” pitch with good movement.

While his pitch arsenal is effectively broad, Biddle’s premier pitch is a big, sweeping curveball that has served as his primary out-pitch. Due to a “three-quarter” slot delivery, Biddle is able to produce tight spin and a devastating 12-6 break, which along with his fastball has served as swing-and-miss pitches that have allowed the Phillies prospect to produce high strikeout totals throughout the minor leagues.

In terms of command, Biddle has the ability to locate his fastball to both sides of the plate, but has been inconsistent in that respect, as has been seen in his off-speed pitch offerings. While he has worked on his command consistency throughout the season, Biddle’s control has been superb. An easy delivery, sound mechanics, and athletic build all contribute to his plus control, which has been apparent in his domination of Double-A baseball in 2013. 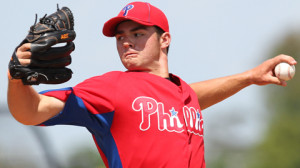 Just how good has Biddle been this season? Well, for starters the Philadelphia prospect was named the Eastern League Player of the Month for a dominant April in which he posted a 2-1 record and a 1.74 ERA with a 40/12 strikeout to walk ratio in 31.0 innings of work.

Biddle’s month of dominance was capped off by an April 22 start against Harrisburg in which he struck out an impressive 16 batters in seven innings, en route to a 3-2 victory for the Reading Fightin Phils.

In his most recent start on Tuesday, May 21, Biddle worked 7 2/3 scoreless innings, surrendering just three hits and striking out nine batters in a 3-0 victory over the Altoona Curve.

Through nine starts this season, Biddle has posted a 2.50 ERA and an impressive 0.954 WHIP. In addition, Biddle has a 60/24 strikeout to walk ratio in 50.1 innings of work, along with a solid 10.7 strikeouts per nine innings rate.

Aside from Cliff Lee and Kyle Kendrick, the Phillies have dealt with an inconsistent starting rotation this season. Poor play by and injuries to Roy Halladay and an inconsistent Cole Hamels who owns a paltry 1-7 record and 4.45 ERA highlight a rotation that has contributed to a 4.23 team ERA, third-worst in the National League. Despite solid efforts by newcomers Jonathan Pettibone and Tyler Cloyd, the outlook for the stretch ahead (and beyond this season) is not relatively bright.

A mediocre season has left the Phillies with a 22-24 record, good enough for third in a relatively weak NL East division. An inconsistent season on all accounts leaves the Phillies with multiple unanswered questions, namely that of the state of the starting rotation and its future composition, stability, and strength.

Much like the case involving Baltimore pitching prospect Kevin Gausman who will be called up to make his major league debut on Thursday against the Toronto Blue Jays, the Phillies may opt to promote Biddle at some point this season as means to spark the rotation and begin the transition to the rotation of the future.

While Biddle has displayed excellent control and big league-level talent at Double-A Reading this season, the Phillies must decide whether to continue in the development and polishing of their top pitching prospect or give him the call to help the big league rotation for the stretch ahead.