Posted by Joshua Vadeboncoeur on May 21st, 2013

The Baltimore Orioles starting rotation has been exposed for its true composition, that of a struggling core of pitchers who have been unable to counter and support the production of the club’s solid offensive lineup, in the wake of injuries to starters Wei-Yin Chen and Miguel Gonzalez. 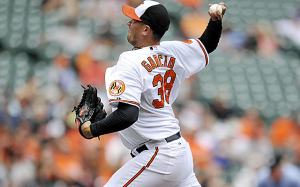 Veteran journeyman Freddy Garcia and former-Braves starter Jair Jurrjens have joined the rotation in recent weeks to sustain the staff in the absence of the aforementioned injured starters; however, neither starter has contributed much of any proactive significance to the rotation.

In all honesty, the rotation was not any better off with Chen and Gonzalez in the middle of the rotation.

Mediocrity has followed its way back onto the rotation with Garcia and Jurrjens as of late. In four starts for Baltimore, Garcia has posted an 0-2 record and a 4.84 ERA, along with a paltry 8/6 strikeout to walk ratio in 22.1 innings of work.

What is most disturbing for Garcia is that he has allowed six home runs in those four starts, an alarmingly high number. As for Jurrjens, in his single start on May 18, surrendered four runs in five innings, a game that the Orioles would go on to lose 6-10 to the Tampa Bay Rays.

Over the last ten games, Baltimore starters have registered only two quality starts. In that ten-game span, the Orioles are 2-8 after having started the month of May with a positive record of 5-2 and an April in which they posted a solid 16-11 record. 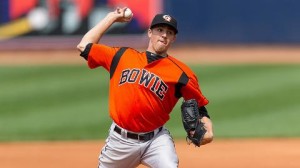 Given the recent woes faced by the Orioles rotation, which boasts the seventh-worst team ERA in the majors at 4.34, much buzz has surrounded top pitching prospect Kevin Gausman who has been solid in his time at Double-A Bowie this season.

The fourth-overall pick in the 2012 MLB Amateur Draft by the Baltimore Orioles, Gausman has been heralded by analysts and scouts as one of the premier pitching prospects in baseball along with fellow pitching prospect phenom Dylan Bundy. While Bundy has been put on the shelf until June with elbow discomfort, Gausman has stepped into the spotlight with his respective talents.

In eight starts this season, Gausman has registered a 3.11 ERA and a solid 49/5 strikeout to walk ratio in 46.1 innings of work. In his most recent start on Friday against the Trenton Thunder, Gausman worked six innings of one-run ball while striking out 10 batters.

As his scouting report has suggested, Gausman has commanded a mid-high 90s fastball and a plus changeup, while effectively changing pitch speed and selection this spring.

His progression through the minors and recent success have given many reason to believe that he is ready to join the Baltimore rotation and contribute to a struggling pitching staff.

While promoting Gausman to the big leagues may serve as an effective move for a struggling pitching rotation, wherein a mature and talent-ready prospect like Gausman could energize a deflated staff and give the young starter a great opportunity to gain big league experience, such an early move may present setbacks for the Orioles.

Given the event that Gausman is promoted, such would be reminiscently similar to that of former Baltimore first-overall draft pick Ben McDonald. McDonald, a highly touted pitching phenom out of Louisiana State University, was rushed to the big leagues and was never given the opportunity to develop in a manner that was appropriate in allowing him to effectively harness and polish his raw talent.

While many feel that Gausman is big league-ready, the argument can be made that further development is necessary for the Baltimore prospect to develop further into a mature, poised, and polished front of the rotation talent.