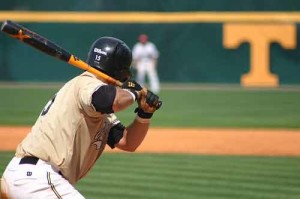 Vanderbilt University baseball has had a season for the record books and every team in the Southeastern Conference is surely well acquainted with their success.

And by well acquainted, I mean having been walloped by an elite offensive lineup and pitching arsenal.

The Commodores are so acquainted with the SEC division (one of the most competitive divisions in college baseball) that they have not lost a single series against SEC teams this season, wherein they have swept Auburn, Kentucky, Mississippi State, Missouri, Ole Miss, South Carolina, and Tennessee en route to a 26-3 record in divisional play this spring.

That 26-3 record now stands as an SEC record, as no other team has ever won 26 games in divisional play, which the Commodores achieved in their final regular season game on Saturday, a 14-10 victory over Alabama at home.

With their tenth conference series victory of the season on Saturday, the Commodores finished out a regular season with an impressive 48-7 record.

Vanderbilt will enter conference tournament play ranked No. 1 in the country, a spot they have occupied for the past four weeks since unseating North Carolina in late-April.

The Vanderbilt squad is comprised of some of the best college level talent in the country. Take their starting pitching rotation for instance.

Kevin Ziomek and Tyler Beede have become one of the most effective one-two punches this season, garnering an impressive 23 combined victories this spring.

Projected as a potential late first-round to early second-round draft pick in this year’s MLB Amateur Draft, Ziomek has ranked amongst the top pitching talent in this year’s draft crop.

Ziomek possesses a solid three-pitch arsenal consisting of a plus fastball, breaking ball, and an electric changeup that ranks as one of the best in college baseball. Much like former-Vanderbilt southpaw David Price, Ziomek should offer a future team a strong arm with excellent command and control.

On offense, the Commodores have been led by the likes of infielder Tony Kemp and outfielders Connor Harrell and Mike Yastrzemski. Kemp has provided speed, great defense, and superb hitting this spring, batting .408 with 30 RBI. Harrell and Yastrzemski have provided big bats to the lineup, combining for 14 home runs and over 60 RBI, each batting well over .300 on the season.

A strong starting rotation, offensive lineup with great ability and depth, and a lock-down bullpen has established Vanderbilt as one of the most complete college baseball teams this season.

The Commodores commence the SEC Tournament on Wednesday, May 22, facing the winner of Tuesday’s single elimination game between Florida and Texas A&M.