The 2013 MLB Amateur Draft has precipitated much discussion and hype surrounding the likes of top college pitching prospects Mark Appel, Jonathan Gray, Sean Manaea, and even Braden Shipley. While there is no reasonable doubt of the aforementioned prospects’ pitching abilities, focus has been undeniably given towards these arms, particularly in the wake of recent strong performances by Shipley.

While attention has been focused on these arms, as well as top-ranked high school pitchers Kohl Stewart and Ian Clarkin, one particular college arm, while still projected as a potential first-round pick, has gone under the radar. That college arm belongs to University of Florida ace Jonathon Crawford. 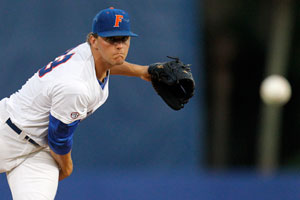 Flying under the radar is not foreign to Crawford, who was selected as a 42nd-round draft pick by the Florida Marlins in the 2010 MLB Amateur Draft (1,277th overall pick) out of Okeechobee High School.

Although ranked 19th in the state of Florida by Perfect Game in 2010, garnering the attention of colleges such as Florida International University and the University of Florida, Crawford was not highly touted outside of Florida.

Despite garnering primarily local attention, Crawford would impress University of Florida recruits and would make five appearances in 2011, his freshman season on the squad.

Following a season in which he was the owner of a 4.91 ERA and a BAA of .316, Crawford would be sent to the Northwoods League for the 2011 summer, where he would gain much needed confidence and a correction of his mechanics.

Among the corrections was his pitch delivery. Having thrown from an “over the top” slot throughout high school and his freshman season at Florida, Crawford adopted a “three-quarter” slot delivery while in the Northwoods League. The new delivery slot would pay off greatly, not only giving Crawford great sinking action to his fastball, but also allowing him better control of his pitches and command of his game.

While the delivery slot change improved his fastball, Crawford’s curveball was sacrificed due to a decrease in spin from the “three-quarter” slot. However, the change would give rise to Crawford’s premier pitch, his slider. With less break than his curveball, the increased speed would make for a definite out-pitch, which ranks as one of the best sliders in this year’s draft.

Crawford’s development would be documented in his breakout season in 2012, a season in which he posted a 6-2 record and a 3.13 ERA in 77.2 innings of work. Although Crawford turned in a great regular season for the Gators, his best performances would be saved for Super Regional and NCAA Tournament play. 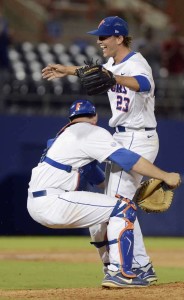 Throughout NCAA Tournament play, Crawford posted a 2.30 ERA with a 13/2 strikeout to walk ratio in 15.2 innings, highlighted by a complete-game no-hitter against Bethune-Cookman in the Gainesville Regional (the first for a Florida pitcher since John Burke no hit Furman on May 23, 1991).

Crawford’s no-hitter drew buzz from MLB scouts across the country, as many analysts, scouts, and talking heads labeled him as a potential first-round pick in the 2013 draft.

Coming into the 2013 season, Crawford was heralded as one of the premier starting pitchers in college baseball along with Stanford’s Mark Appel, Arkansas’ Ryne Stanek, and NC-State’s Carlos Rodon. However, his draft stock has taken a drastic hit due to an inconsistent spring.

At times, Crawford has struggled with command of his off-speed offerings, namely his changeup, resulting in a higher walk-rate and shorter starts due to high pitch counts. Related to his issue of command is his ability to mix his pitches (and rate of pitch speed) more efficiently, as Crawford has a tendency to throw each of his offerings relatively hard. In order to achieve at the next level, Crawford is going to have to learn to refine his pitch offerings and mix his pitches at a smooth rate of adjustment.

Undeniable though is Crawford’s pure pitching talent, which has been showcased multiple times throughout each of his fourteen starts this spring. Crawford boasts a plus fastball that has touched 98 MPH at times this season, a pitch that he puts great sinking action on and can locate across the plate with great ease.

Contrary to scouting reports that have questioned his ability to keep maintain velocity deep into starts, Crawford has (in most starts) kept his velocity in the low to mid-90s deep into his starts. For example, on March 30, Crawford pitched a complete-game shutout against Ole Miss, surrendering just two hits and striking out eight batters.

As was seen in that 7-0 shutout victory against Ole Miss, Crawford possessed great command of his fastball and slider, locating his pitches to both sides of the plate with plus movement and making Mississippi batters swing and miss on his slider. Although he has been observed to over-rely on his slider as an out-pitch, Crawford has cashed in on his signature pitch, baffling much of college baseball.

Hard work, patience, maturity, and the drive to succeed have helped Jonathon Crawford become the ace of the University of Florida starting rotation, a clubhouse leader, and one of the premier pitching prospects in this year’s draft.

Much like the lack of buzz that followed him out of high school, Crawford is once again flying under the radar as a top pitching talent. However, one auspicious MLB club will draft Crawford with hopes of grooming a successful future starter, as did the University of Florida three short years ago.