Posted by Joshua Vadeboncoeur on May 18th, 2013 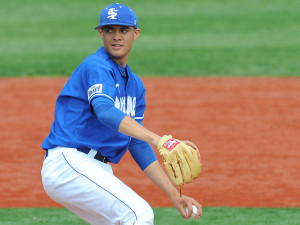 Analysts, scouts, talking heads, and even the informal baseball observer have labeled this year’s First-Year Player Draft a lackluster offering of talent compared to years past.

Despite the fact that this year’s draft lacks a definitive marquee prep star or can’t-miss phenom, the pool of talented high school and college arms and bats is still rather impressive.

Most impressive of all is the quantity and quality of college pitching prospects, wherein over a dozen college arms are projected to develop into solid middle and front of the rotation starting pitchers.

At the top of most draft boards are two elite college pitchers, University of Oklahoma’s Jonathan Gray and Stanford University’s Mark Appel. Both flame-throwing right-handers have had excellent seasons, pitching on a level like no other in college baseball.

In all honesty, these two young arms have a strong potential to become plus starting pitchers and the front-end fixtures of their teams’ starting rotations.

Entering the 2013 college baseball season, Jonathan Gray projected as a top pitching prospect, but has steadily pitched his way to become the preeminent prospect in the draft. Through 13 starts this season, Gray has a stout 1.43 ERA and an impressive 112/19 strikeout to walk ratio over 94.2 innings of work.

Gray has a diverse pitching repertoire highlighted by a blazing, plus fastball that has consistently reached triple digits and a powerful slider that has quickly developed into an out pitch for the Oklahoma flameslinger.

Having been drafted eighth overall by the Pittsburgh Pirates in last year’s draft, Mark Appel chose not to sign and returned to Stanford for his senior year.

Since returning to the Stanford rotation, Appel’s stuff has improved and for the second straight year is one of, if not the top pitching prospect in the draft.

Appel has an impressive three-pitch arsenal (circle changeup, fastball, slider) with great velocity, movement, and location to go along with commanding poise on the mound.

While not quite as polished as Gray or Appel, electric junior starters Sean Manaea and Ryne Stanek have been impressive throughout this spring, showcasing their respective pitching talents.

Indiana State University southpaw Sean Manaea has a tall, strong frame with a big arm, boasting a plus fastball that consistently sits in the mid-90s and effective off-speed offerings.

Arkansas right-hander Ryne Stanek, despite occasional command issues, has an elite fastball that maintains mid-90s velocity deep into starts with plus sinking action. A true powerhouse in terms of arm strength, Stanek may become a key fixture of a team’s bullpen in the future.

Gonzales has an effective fastball in the low-90s, but has showcased his best stuff with his off-speed arsenal, which consists of a plus changeup and slider.

Williams, though suffering an inconsistent spring compared to a stellar 2012 campaign, has a diverse arsenal which he can all throw for strikes and locate with great accuracy.

Crawford, despite command issues and a struggling changeup this spring, has had dominating starts this season where he has showcased a mid-90s fastball that maintains velocity deep into starts and a wipeout slider that has ranked amongst the best in college baseball.

Shipley has a plus fastball that can hit the upper-90s and is not afraid to use the plate and be aggressive with hitters.

Anderson, despite questions of fatigue when pitching deep into starts, has a great three-pitch arsenal that contains a mid-90s fastball and wipeout slider.

Aaron Blair, Ryan Eades, Bobby Wahl, Tom Windle, and Kevin Ziomek are all plus starters with great big league upside and the ability to move through the lower levels quickly (especially Wahl and Windle who have the tools to make a quick transition to the major leagues).

As can be seen, the 2013 draft has a great core of college pitching talent that is highlighted by big arms, commanding finesse, and major league-ready poise. College pitching is often times undervalued, particularly this year; however, this year’s crop has the quality and talent to be valued by major league clubs, as it should.