A’s Dan Straily Should Stay in the Major Leagues 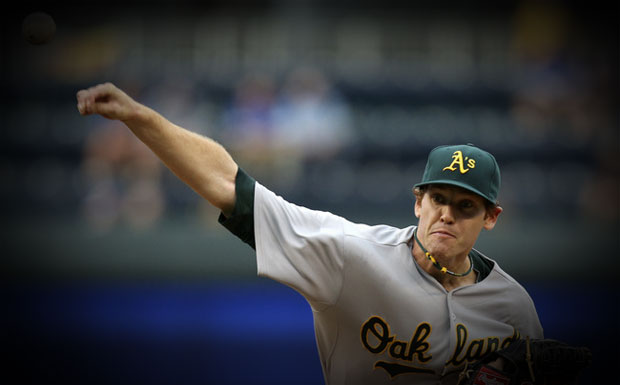 The Oakland Athletics have been cultivating quality, homegrown pitchers since the late-1990s. The likes of Tim Hudson, Mark Mulder, Barry Zito, Rich Harden, Joe Blanton, Huston Street, Trevor Cahill, Brett Anderson, and Andrew Bailey have all come up through the farm system.

Heck, even Jason Isringhausen, Dan Haren, and Gio Gonzalez–though not original Athletics–have too found solace as young acquisitions for the A’s at the major league level.

Yet, even though the A’s have long prided themselves on the ability to develop their own pitching staffs, the organization has seemed to malign a pitcher who could very well be a future ace. That pitcher is Dan Straily.

The former 24th round pick has dominated at all levels of the minor leagues–particularly the hitter-friendly PCL. In 85.3 IP at Triple-A (between 2012 and 2013), Straily has owned a 1.79 ERA, 0.89 WHIP, and 4.08 K/BB. His excellent 10.8 K/9 was fueled by an expansive five-pitch repertoire, which features a four-seam fastball, sinker, slider, curveball, and change-up.

Straily was first promoted to the major leagues in August 2012, where he posted a solid 3.89 ERA, 1.32 WHIP, and 2.00 K/BB over 39.3 IP. The right-handed pitcher made the club in 2013–but only as a substitute for the still-suspended Bartolo Colon. In Colon’s absence, the 24 year-old Straily hurled a 6.6 inning gem, limiting the Houston Astros to just five hits, two earned-runs, zero walks, and eleven strikeouts.

But instead of being handed a rightfully-earned rotation spot, the right-hander was immediately optioned to Triple-A. While Colon has been masterful to-date (3.38 ERA, 1.03 WHIP, 20.00 K/BB over 32 IP), the majority of the Athletics rotation has not been.

Similarly, Brett Anderson has too gotten off to a rotten start. Perhaps due to injury–most recently, a sprained right ankle injury–Anderson currently owns a 7.23 ERA, 1.77 WHIP, and 1.85 K/BB. The pitcher is also just averaging 4.73 innings per start.

With nothing left to prove in the minor leagues, Dan Straily deserves to be a mainstay in the majors. Assuming Anderson only misses one turn in the rotation, the Athletics should perhaps demote Parker as opposed to banishing Straily again. Even though Parker is a former first round pick, both pitchers are 24 years-old and should have long futures for the A’s–so why continue to demote Straily for simply being quality depth?