5 Top Prospects Headed for Minors, But For How Long 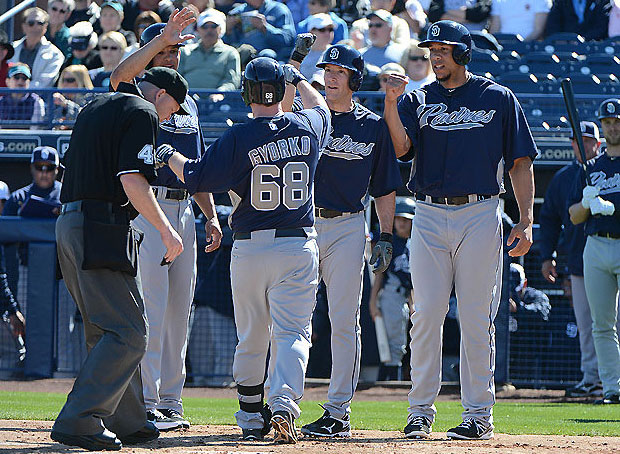 Promoting a Major League-ready prospect seems like a logical move for any organization looking to win. Yet, even the most consistently solid organizations are faced with a few hurdles that prevent the obvious from happening. Below is a list of five top prospects who could easily help their respective teams now, but are still projected to start 2013 in the Minors.

Wil Myers was involved in one of the biggest trades this off-season, heading a package which sent “ace” pitcher James Shields to the Kansas City Royals. Yet, even though the Rays could certainly use Myers’ bat in the lineup (.314/.387/.600 line and 37 HR in 2012), the organization has been pretty vocal about their plan to place Myers in Triple-A to start the season. While it’s possible the Rays are stashing the 22 year-old in the Minors for future arbitration reasons, the team also doesn’t want to “rush” their new top prospect–especially since he’ll be learning a new position (right field).

The Diamondbacks dealing of Trevor Bauer raised a lot of eyebrows in baseball. Despite being the organization’s top prospect–and the #9 ranked prospect in baseball according to Baseball America, pre-2012–the Snakes had little doubt about swapping him with glove-first shortstop prospect Didi Gregorius. Bauer was then re-packaged to acquire Shin-Soo Choo from the Indians. While the 22 year-old pitcher lacks Major League experience, his dominance in the Minors during 2012 (combined 2.42 ERA, 1.28 WHIP, 2.57 K/BB), should make him a far more exciting option over the likes of Brett Myers, Ubaldo Jimenez, Justin Masterson, Zach McAllister, and Daisuke Matsuzaka. But as it stands, the Indians will let the young hurler spend some additional time in Triple-A come 2013.

According to Baseball America, Jurickson Profar is not only the Rangers’ top prospect, but also, the top prospect in baseball. But when the likes of Ian Kinsler, Elvis Andrus, and Adrian Beltre occupy all possible infield slots, even a near-future stud like Profar will have a hard time finding a job. That said, in almost any other organization, it’s fair to say that the 20 year-old would easily be an Opening Day starter at shortstop. If Profar continues to rake in the Minors, it will surely force the Rangers to make a roster move on the Major League level.

When the Pirates drafted Gerrit Cole with the first overall pick of the 2011 draft, the organization more or less knew they were getting a Major League-ready starting pitcher. Cole proved this label by hurling a combined 2.80 ERA, 1.19 WHIP, and 3.03 K/BB between Advanced-A, Double-A, and Triple-A last season. One could make the argument that the 20 year-old could use more than 6 innings at Triple-A, but it’s similarly hard to dispute that inserting Cole into a rotation of A.J. Burnett, Wandy Rodriguez, James McDonald, and Jeff Karstens would vastly improve the Major League squad–which appears to be the Pirates’ focus in 2013.

At age 24, Jedd Gyorko is “getting up there” in terms of age for a prospect. But when a hitter posts a .311/.373/.547 line with 30 HR–most of which coming at Triple-A–perhaps it’s time for a full-time trip to the show. Yet, even though the third baseman enjoyed a career year in the Minors, it just so happens that the Padres Major League third baseman, Chase Headley, too posted a heck of a season in 2012 (144 OPS+, 31 HR). It’s possible that if Yonder Alonso struggles, the Padres will start feeding grounders to Gyorko at first base, but as of now, the third baseman will be Triple-A-bound.