With the ever rising cost of offense, more and more teams are looking to platoons as low-cost, high-reward options. The platoon is hardly a new managerial tool, but it seems as though there are more teams using the stat-heavy angle to leverage player’s stronger sides to enhance the team’s production–while also saving a penny or two in the process. Below is an in-depth, projected list of National League organizations and their respective platoons for 2013.

Using Chris Johnson in a traditional platoon might be a bad move, as the right-handed hitter is actually better against his own kind (career .283/.323/.452) than he is against southpaws (career .255/.294/.372). The 28 year-old enjoyed a better overall season than Francisco did in 2012, posting a 108 OPS+ and 15 HR. Even though Johnson was a minor piece in the deal that landed Justin Upton in Atlanta, with a giant void at third base, the hitter might become an integral part of the organization–at least for 2013.

It wasn’t too long ago that Gorkys Hernandez was considered a top prospect in baseball. Baseball America tabbed the outfielder as the 92nd best prospect pre-2008, and the 62nd rank in pre-2009. Hernandez was also included in two high-profile trades, being paired with Jair Jurrjens to the Braves for Edgar Renteria in 2007, and again in 2009, this time packaged with Jeff Locke and Charlie Morton to the Pirates for Nate McLouth. Without much pop (career .720 OPS) or patience (career 7.8% BB%), the 24 year-old’s only true asset is his speed (164 SB in 697 career MiLB games). But the Marlins also probably like his splits against lefties, as the righty owns a .295/.386/.415 career MiLB line against them. The combination of Pierre and Hernandez will surely make a speedy platoon. Brantly was shipped to the Marlins with Brian Flynn and Jacob Turner for Anibal Sanchez and Omar Infante. Badly needing some offense–due to the lack of which from John Buck–the Marlins handed Brantly the majority of at-bats versus RHP. Given the backstop’s good career splits in the Minors (career .292/.334/.428 vs. RHP), his success against RHP for the Marlins shouldn’t have been that surprisingly. But regardless, his .313/.396/.513 line against far exceeded expectations. Brantly has to learn to hit lefties (career MiLB .259/.316/.323 line vs. LHP, 2012 MLB .200/.273/.250 line vs. LHP) a bit better before earning full-time duties, but time is on his side.

Perhaps the Marlins just want to get Jeff Mathis‘ sterling defense (career 6.8 dWAR) in the game, or don’t want to tire out youngster Rob Brantly, but let’s be clear: Jeff Mathis is a horrible hitter. Aside from owning a career 53 OPS+, the right-handed hitter is as bad versus lefties (career .209/.269/.337 line) as he is against righties (career .193/.250/.305 line). His .406 SLG against RHP pitching last season was his best clip since 2008 (.421 SLG), but it’s unlikely he can even maintain that rate. If and when the Marlins get sick of Mathis’ negative offensive contribution, watch the training wheels fly off of Rob Brantly. RIGHT FIELD – The New York Mets right field platoon might be the worst in history. The organization plans to use Mike Baxter, a career .253/.354/.407 hitter, and Andrew Brown, a career .224/.284/.396 hitter, against RHP and LHP, respectively. Baxter has a little more Major League experience to speak of, but still barely enough put much weight in his splits. The 28 year-old owns a .275/.370/.440 line versus RHP in the bigs, but just a .277/.367/.370 line against them over the past two seasons in the Minors. With a small skill set as it is, there’s very little that could go right to outweigh what is likely to go wrong.

Andrew Brown is the more intriguing option given his three consecutive twenty-plus homerun seasons in the Minors. Brown’s 2012 stint in Triple-A was also his most fruitful, swatting a .308/.364/.597 line and 24 HR in 438 PA’s. The more eye-popping stat in 2012 may be his slash versus LHP, posting an impressive .284/.365/.608 line. The 28 year-old also hit well against LHP in 48 PA’s for the Rockies last season too, hitting to the tune of a .275/.375/.400 line. Brown will have to produce somewhere between his MLB and MiLB vs. LHP splits in order to merit the playing time he’s in position to receive. 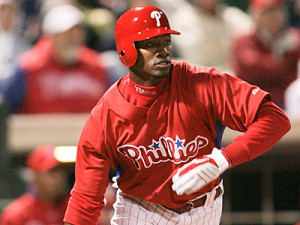 LEFT FIELD – Has there been an organizational that has shown more public and undeserved discontent with a top prospect than the Phillies and Domonic Brown? As recent as 2011, Brown was not only considered the Phillies top prospect, but also, a top five prospect in all of baseball (according to Baseball America, pre-2011). This was due to an explosive 2010 season, where the then 22 year-old posted a combined .327/.391/.589 line with 20 HR over 389 PA’s. But even though the young outfielder deserved a starting gig, the Phillies acquired Hunter Pence in a July 2011 trade to play right field, and Manager Charlie Manuel preferred using veterans like Raul Ibanez (91 OPS+ in 2011) and Juan Pierre (94 OPS+ in 2012) in left field.

Perhaps attributed to the constant shuttling back and forth between the Minors and Majors, as well as the obvious lack of confidence the organization showed in Brown, the former top prospect doesn’t appear to carry the same luster he once had. Despite the .310/.360/.473 line he posted in Triple-A this past season, he only collected 5 HR (in 261 PA’s). The left-handed hitter also only owns a mere .236/.315/.388 line in 492 career Major League PA’s. It’s likely Brown will finally be used in a more-or-less starting role–versus righties–but it’s a good bet the Phillies will keep him on a short leash. 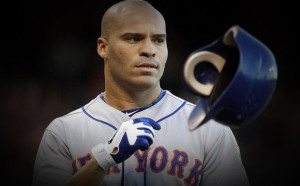 Scott Hairston has withstood an impressive volume of injuries since 2002, formally being placed on the disabled list seven times in the ten-year span. And while Hairston has never played a full-season in the Majors due to his knack for getting injured, the right-handed hitter did illustrate what he’s capable of when healthy–at least, versus left-handed pitching. The 32 year-old posted an overall 117 OPS+ over 398 PA’s, including a dominant .286/.317/.550 line versus southpaws. Yet, even though 2012 was arguably the righty’s best offensive season, the 32 year-old also walked a career-low clip (4.7% BB% versus prior career 7.1% BB%). Hariston also strikes out at an alarming rate for a part-time player (career 21.1% K%), so if 2013 turns out to be closer to 2011 (.247/.307/.395 line vs. LHP), he’ll be pretty useless.

RIGHT FIELD / FIRST BASE – When the Blue Jays traded Travis Snider to the Pirates last season, it was essentially a public admittance by the organization that “Travis Snider is a bust.” Snider was picked 14th overall in the 2006, but never amounted to much in the Majors (career 94 OPS+ in 1061 PA’s). And even though the left-handed hitter didn’t impress upon moving the NL (84 OPS+ in 145 PA’s), the 25 year-old might still play a significant role in the Pirates’ 2013 outfield. Over the past two seasons in the Minors, Snider has owned a fantastic .344/.422/.569 line against RHP. Even though there is a tremendous disparity between the former-prospect’s MiLB (career .308/.383/.528 line) and MLB (career .248/.309/.415 line) numbers, perhaps Snider will find a new life as a platoon player. With back-to-back solid seasons for the Marlins (108 OPS+ in 2010 and 113 OPS+ in 2011), it appeared as though Gaby Sanchez would be the team’s starting first baseman for the next few seasons. Yet, after posting a horrid 51 OPS+ over his first 196 PA’s in 2012, the Marlins sent the 28 year-old packing. Sanchez improved moderately with the Pirates (101 OPS+ in 130 PA’s), but still seemed to lack the double-digit homerun power he had exhibited in years prior. Sanchez probably won’t get a chance to be a full-time starter in 2013, but the Pirates will likely take advantage of his career .291/.385/.484 line against LHP.

Garrett Jones has never been a productive hitter against LHP (career .198/.237/.353 line), which is why the Pirates will platoon him against RHP with Snider in right field, and Sanchez at first base. The 31 year-old Jones enjoyed his fourth consecutive double-digit homerun season in 2012, and best individual homerun total to boot. But even though Jones swatted 27 HR and posted a 129 OPS+, it’s worth noting that 92.5% of his homeruns came against right-handed pitching. RIGHT FIELD – Will Venable has quietly been a valuable asset for the Padres over the past four seasons. Since 2009, Venable has owned a 107 OPS+, and averaged 21 SB. But as valuable as Venable has been, he can’t hit a lick versus LHP. The left-handed hitter owns a career .216/.295/.287 line vs. southpaws. And yes, his OBP is higher than his SLG. The Padres have done their best to limit Venable’s exposure to left-handed pitching over the years, so 2013 should be no different. In 2010, when Andres Torres posted a 122 OPS+ in 570 PA’s for the Giants in his first full Major League season–despite being 32 years-old–it became a classic “underdog” story. Yet, when Torres follow-up his amazing display with perhaps a more indicative 84 OPS+, he immediately became expendable. The Giants shipped the maligned outfielder with reliever Ramon Ramirez to the Mets for Angel Pagan, a trade which quickly became an eye-roller for Mets fans. Torres looked like his insignificant 2011-self again in 2012, posting a 85 OPS+ over 434 PA’s.