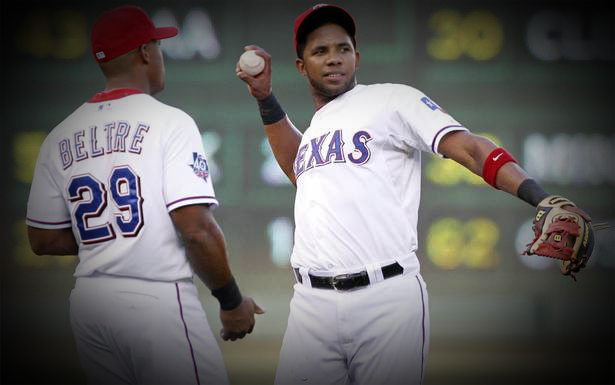 One strike away from winning the World Series against the St. Louis Cardinals in 2011 only to see David Freese turn their celebration into heartache, the Texas Rangers lost the American League West to Oakland on the last day of the 2012 campaign and then were dismissed from the wild card game by Baltimore.

This year, the Rangers lineup will be without Josh Hamilton (Angels) and Mike Napoli (Red Sox), who both bolted via free agency; and Michael Young, who was dealt to Philadelphia. Yet manager Ron Washington‘s club should still score bunches of runs. 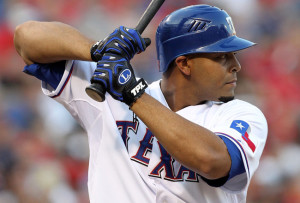 There is still speculation that Texas will eventually trade shortstop Elvis Andrus to upgrade the lineup and/or rotation, and open a spot for Jurickson Profar, who is the top overall name on the Baseball News Source Top 10 Prospects List for 2013.

The Rangers opted to trade Young because of the presence of top prospect Mike Olt, who is a slugging right-handed bat and can play DH and the corner infield positions. Profar’s natural position is shortstop, but he can proficiently play second and third so he gives Texas insurance in case of injury to Beltre, Andrus or Kinsler.

Joe Nathan is slated as the closer and he will be joined in the pen by former All-Star closer Joakim Soria, who departed Kansas City via free agency.

After capturing back-to-back American League pennants in 2010 and 2011, and falling in the wild card game last year, the Rangers enter spring training as arguably the third best team in their own division behind the Angels and the A’s. The much-improved Mariners have a chance to overtake the Rangers as well.

Though the AL West is not as deep as the AL East from top to bottom – after all, the Houston Astros are new to the AL West this year and will likely top 100 losses – it is dramatically better than when the Rangers reigned in 2010 and 2011. Texas is a team that will score ample runs, but it will rely upon its rotation more heavily this year than in recent seasons. 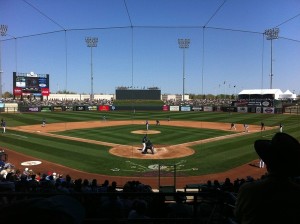 Constructed on the former site of a World War II pilot training field, Surprise Stadium is the spring training home of the Kansas City Royals and the Texas Rangers.  The stadium is essentially split into two halves. Everything Royals – dugout, bullpen, clubhouse, logos, banners – is on the left (third base) half; the Rangers get the same treatment on the right (first base) side. The stadium was the brainchild of the architects at HOK Sport and they followed the recent minor league stadium trend of including a small second deck.

Fans enter the ballpark at street level through gates in the outfield. The main entrance is behind center field. Lesser used gates can be found in left and right field, each slightly to the foul side of the foul pole.

The Surprise Recreation Campus is home to Surprise Stadium, which houses both the Royals and Rangers. Each team has a 37,000 square foot clubhouse.

Surprise Stadium is the centerpiece of the city’s Surprise Recreation Campus, a 132-acre complex that includes a little bit of everything. In addition to baseball practice facilities, the campus is home to the city’s aquatic center, tennis complex, community park, and a regional library, all of which are across the street from the stadium’s main entrance.

Located 20 miles northwest of Phoenix, Surprise was composed of a gas station and a couple small houses when it was founded in 1938. Today, it is the spring training home of the Royals and Rangers, and a 74-square-mile city that continues to grow.

Surprise is flanked by one of Arizona’s largest mountain preserves and is nestled in the Sonoran Desert. Among the interesting attractions there are: 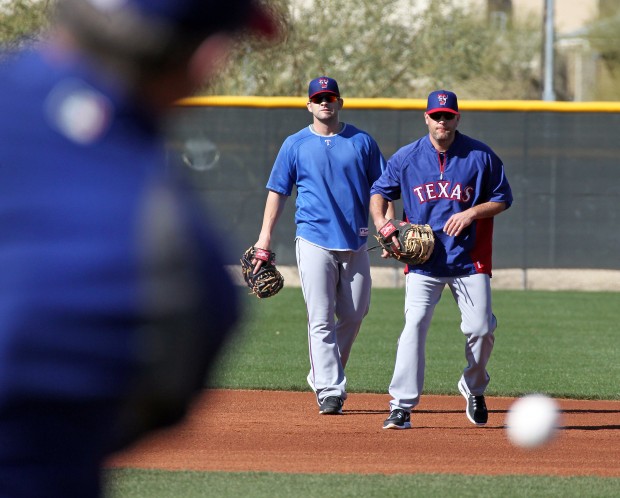 For more information about tickets and for the Royals spring training schedule, visit here.