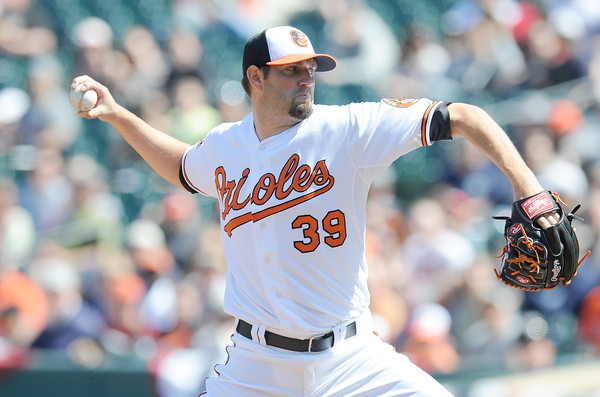 The Baltimore Orioles reached agreements with right-hander Jason Hammel and reliever Jim Johnson on one-year deals to avoid arbitration according to Dan Connolly of the Baltimore Sun. The two deals leave only reliever Darren O’Day as the only player the Orioles are at risk of going to an arbitration hearing with, although that is not likely.

Hammel requested $8.25 million and was offered $5.7 million by the Orioles when arbitration figuit’sres were exchanged last month. Hammel can earn an additional $300,000 in incentives. Hammel will be a free agent after this season. Hammel posted a 3.43 ERA over 118 innings of work in 2012.

Johnson requested $7.1 million and was offered $5.7 million from the Orioles. Johnson’s $6.5 million deal offers incentives based on the number of games finished. Johnson posted a 2.49 ERA and led the majors with 51 saves in 2012 and will remain under team control through 2014.

O’Day requested $3.2 million and was offered $1.8 million by the Orioles. The team is reportedly close to agreeing to a two-year deal with an option for 2015 with the 30-year-old right-hander. O’Day pitched him pitched 2.28 ERA over 67 innings in 2012