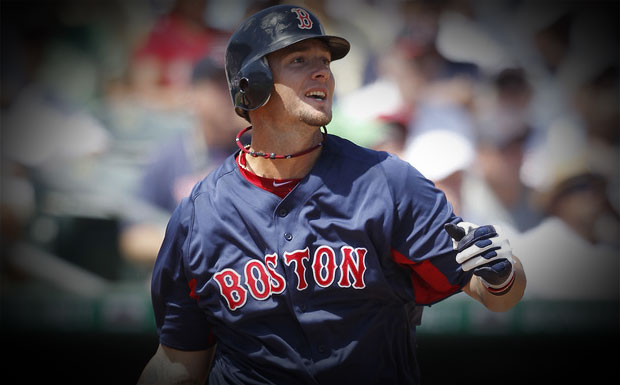 With the ever rising cost of offense, more and more teams are looking to platoons as a low-cost, high-reward alternative. Even though penny-pinching organizations like the Oakland Athletics and Tampa Bay Rays have long been using the platoon, now even bigger market teams–like the Baltimore Orioles, Texas Rangers, and Boston Red Sox–are beginning to join the fray. Below is an in-depth, projected list of the organizations and their respective platoons for 2013.

LEFT FIELD – Nate McLouth quickly went from a hot young player to mysterious dud. After posting a combined 116 OPS+ and 6.6 WAR between 2007 and 2009 (ages 25-27), the left-handed hitting outfielder plummeted to a mere 79 OPS+ and -2.9 WAR over the next two seasons. The Atlanta Braves non-tendered McLouth, enabling him to sign a Minor League deal with the Pirates–the organization that originally drafted and raised him. The reunion didn’t last long, however, as McLouth continued with his strangely unproductive ways, swatting a 10 OPS+ in 62 PA’s. 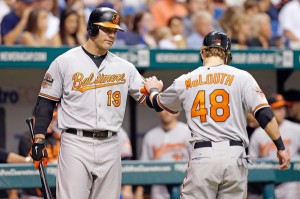 Yet, the Baltimore Orioles threw the 30 year-old McLouth a lifeline, and it paid off. Over the course of his next 236 PA’s, McLouth enjoyed a fruitful 111 OPS+ and 0.8 WAR. Even though it was still a far cry from his 2008-self (125 OPS+ in 685 PA’s), the outfielder trotted onto the free-agent market as a borderline Major League-worthy option. The Orioles rewarded McLouth with a one-year, $2MM deal, but the lefty will still most likely platoon with Nolan Reimold in left-field, as McLouth only posted a .197/.293/.288 line against LHP, while obviously faring better against RHP (.255/.321/.410 line against).

Nolan Reimond has overcome a barrage of injuries and ineffectiveness to be where he is today–but he still has a ways to go. In 2009, Reimold was more or less handed the starting left-field gig, and produced a promising 116 OPS+ as a rookie. The Orioles eagerly tabbed the 26 year-old as a starter the following season, but he floundered–swatting a mere 67 OPS+ in 131 PA’s. His 401 PA’s in Triple-A were hardly impressive either, posting a .738 OPS and just 10 HR. Going into Spring Training, few expected much from Reimold, but he surprised doubters with a solid 111 OPS+, and smacked a .258/.353/.478 line against RHP.

The 28 year-old entered 2012 as the starting left-fielder, and through the month of April, looked like the real deal. Reimold posted a career-high 154 OPS+ with 5 HR, before succumbing to a painful neck injury, which required season-ending surgery. Even though Reimold’s career vs. LHP (.258/.336/.438 line against) and RHP (.263/.339/.465 line against) splits are pretty even, the Orioles will likely use him primarily against LHP in a platoon with McLouth. It’s possible that if either player truly has a terrific Spring, one of them could end-up with the full-time left-field gig.

DESIGNATED HITTER – The Orioles became Wilson Betemit‘s seventh organization in his ten-year career in 2012, after signing a two-year, $3.25MM contract. Even though Betemit is technically a switch-hitter, he has never fared well against LHP as a RHH (career .228/.285/.352 line against), and 2012 wasn’t any different (.140/.219/.186 line against). Yet, despite the 31 year-old’s trouble against LHP, the infielder basks in joy against RHP. In 280 PA’s last season, Betemit posted a .302/.357/.502 line against, including 11 HR. Even though there doesn’t seem to be much competition at DH, there’s a good chance the Orioles will still platoon Betemit with Danny Valencia, who has some success against LHP.

CATCHER – Jarrod Saltalmacchia‘s homerun total in 2012 tends to get a lot of people’s attention. Sure, the 27 year-old catcher smacked 25 dingers, but it was at the cost of 139 strikeouts, a .222 BA, and a poor walk rate (8.4%). Similar to Betemit, Salty is a bad switch-hitter, as he cannot hit LHP for the life of him (career .203/.256/.335 line against). And even though the young backstop enjoyed his best offensive season to-date, he only managed a .170/.211/.283 line against LHP. Needless to say, the Red Sox will most certainly use Salty in a platoon with off-season acquisition David Ross. 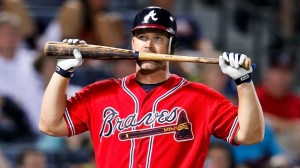 The Boston Red Sox surprisingly struck early in free-agency, inking long-time Braves backup catcher David Ross to a two-year, $6.2MM contract. The move raised some eyebrows, but Ross’s contribution on defense and 119 OPS+ from 2009 to 2012 proved to be solid deciding factors.

Even though the Red Sox figure to use Ross as platoon vs. LHP, the 35 year-old is hardly as lefty-masher. In his career, the catcher owns a .244/.325/.438 clip against southpaws, and only mustered a .241/.307/.405 line against in 2012. As far as platoons go, the pairing of Salty and Ross isn’t a traditionally strong one, yet substituting Ross’s mediocre–but still superior, compared to Salty’s–line vs. LHP, as well as his strong defense will still make for better catcher production in 2013 than what the organization had in 2012. 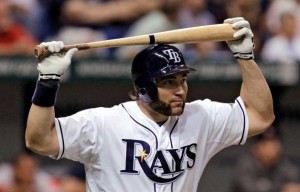 After posting a mere 76 OPS+, the Diamondbacks dealt Roberts to the Rays in late-July for a minor leaguer. Roberts didn’t fare too much better in Tampa, posting a 81 OPS+ over 209 PA’s. Looking ahead to 2013, the Rays are hoping the infielder can team-up with Scott, and be a force versus LHP (career .259/.341/.434 line against). It’s a pretty risky platoon for the Rays, but things always seem to workout for them.

SECOND BASE – Kelly Johnson has been pretty mediocre over the past two seasons (combined 88 OPS+), but for a middle-infielder, he still has good pop (averaged 16 HR since 2007). To-date, his best season was in 2010, when he posted a 127 OPS+ and 26 HR for the Arizona Diamondbacks–production the Rays hope Johnson can channel again.

Even though KJ still has good homerun power for a middle-infielder, his rising strikeout rate (an 11.8% spike since 2009) and declining contact rate (a 13.0% decrease since 2009) make it difficult for an organization–even the Rays–to give him a full-time gig. If Johnson struggles against LHP like he did in 2012 (.201/.297/.309 line against), it’s likely the Rays will turn to Sean Rodriguez to steal at-bats in a platoon.

Yet, the 27 year-old does own a career .252/.362/.389 line against LHP, which might come into handy if Kelly Johnson presumably struggles against southpaws. If KJ has a renaissance season, look for Rodriguez to go the way of Reid Brignac and Elliot Johnson. 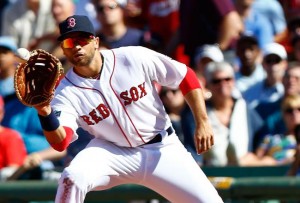 FIRST BASE – Inking low-cost, high-ceiling players like Kelly Johnson and Luke Scott is a Rays trademark–which is why the addition of James Loney was so befuddling. Unlike the above pair, Loney has not been a viable offensive option since 2007, when he posted a 134 OPS+. Since then, the 28 year-old has combined for a 99 OPS+, and swatted a career-low 73 OPS+ in 2012. The lefty does hit RHP well, owning a career .294/.351/.441 line against, but only managed a .257/.305/.357 line against them last season. It’s likely the Rays will platoon Loney with the recently-acquired Shelley Duncan, but the pair is an early favorite for the least productive platoon in 2013. 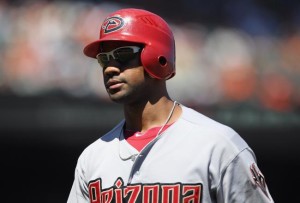 DESIGNATED HITTER – As expected, Seth Smith smacked around RHP for the Athletics in 2012, posting a prolific .259/.352/.454 line. Even though it was inferior to his career split (.283/.361/.503 line against), the combination of his production against RHP, and Jonny Gomes‘ against LHP (.299/.413/.561) made for a fierce platoon. Smith will once again be the A’s designated hitter option vs. RHP, but this year, he’ll be paired with the recently acquired Chris Young.

The A’s might have lost a great LHP-masher in Jonny Gomes, but that’s only because Billy Beane acquired Chris Young in a trade from the Diamondbacks to take his place. The 29 year-old is coming off a bad 2012 season, where he posted a mere 95 OPS+ over 3623 PA’s, but he still managed to swat a .267/.343.467 line against LHP. Crushing southpaws is nothing new to Young, as he owns a .271/.371/.489 career line against them. Not that it matters in terms of being a DH, but Young is also a plus fielder (career 5.7 dWAR).

CATCHER – Some people were astonished when the Athletics acquired John Jaso from the Seattle Mariners this off-season. Prior to acquiring Jaso, it appeared as though the A’s had paved the way for 23 year-old Norris when they cleared Kurt Suzuki in August. Alas, the A’s couldn’t pass up the opportunity to add Jaso to their depth chart. The 29 year-old enjoyed a fantastic season in Seattle, swatting a 144 OPS+ over 361 PA’s. His superb 15.5% BB% and respectable 14.1% K% fit perfectly within the Athletics’ credo.

Derek Norris was one of the four prospects the Athletics received in the trade that sent Gio Gonzalez to the Nationals in 2011. Of those four prospects, only two remain, as the A’s have already dealt A.J. Cole (for John Jaso) and Brad Peacock (for Jed Lowrie) this off-season.

Considering the A’s also dealt Max Stassi (their other top catching prospect) in the Lowrie deal, it obvious the A’s have a lot of confidence in Norris. Even though the youngster struggled a bit in 232 PA’s for the Athletics last season (73 OPS+), he did fare pretty well against LHP in the Minors (.245/.331/.478). Even with Jaso in the picture, the 23 year-old Norris is still considered the “catcher of the future,” but in the meantime, he’ll sit versus RHP.

DESIGNATED HITTER – In an attempt to address their power hitting woes, the Mariners acquired Kendrys Morales from the Angels in exchange for Jason Vargas. Whether or not Vargas’ solid innings are more valuable than Morales’ pop, the slugger’s career 119 OPS+ and career .290/.345/.515 line against RHP is certainly an asset in its own right.  Even though the 29 year-old is technically a switch-hitter, his pathetic .250/.286/.416  line as a RHP (vs. LHP) will limit his 2013 PA’s.

As bad as Morales might be against LHP,  there’s a good chance it will still be more productive than whatever Jason Bay might provide. After becoming a complete enigma for the New York Mets, the team cut their losses, and made the 34 year-old a free agent. While Bay boasts a fruitful .275/.386/.502 line against LHP in his career, the former slugger could only muster a .172/.264/.301 line against southpaws in 2012. It’s likely Bay is toast, so expect Morales to pick-up the slack. 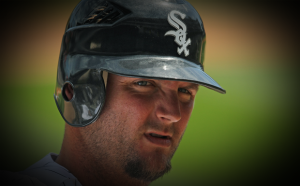 produced his most productive Major League season. In 520 PA’s the free-spirited-catcher posted career-highs in OPS+ (118), homeruns (27), and BB% (5.45 BB%). Yet, the veteran was only able to ink a one-year, $7.5MM deal in free agency. On top of that, Pierzynski is projected to platoon with incumbent Geovany Soto. How is the possible?

Career year aside, Pierzynski still struggled mightily against LHP (.248/.283/.389), but of course, tortured RHP to the tune of a .287/.338/.536 line against. With Soto stealing most, if not all PA’s versus LHP, it will be difficult for Pierzynski to market himself as anything but a platoon after the year.

Given the disparity between his Major and Minor League stats, it’s likely he’ll be paired with Craig Gentry in center field, as Martin smoked RHP in the minors (career .330/.400/.532 line against). That said, since Martin has a far higher upside than Gentry, it’s possible the former will supplant the latter entirely.

DESIGNATED HITTER – It seemed only appropriate that the geriatric-friendly New York Yankees inked Travis Hafner to a Major League contract, and handed him, more or less, a leading DH role. Hafner’s injury history–especially in the last few seasons–rivals the likes of Ken Griffey Jr. So why even bother? With a whole heck of a lot of money tied up to Alex Rodriguez, it’s obvious the Yankees couldn’t afford to sign a David Ortiz-type to fill the void. To the Yanks’ credit, the 35 year-old Pronk crushes RHP (career .287/.391/.534 line), even though his 2012 clip (.241/.361/.437 line) wasn’t as impressive. It’s also important to note that Hafner hasn’t collected over 500 PA’s since 2007.

A guy with a career 88 OPS+ should never be slotted into a designated hitter role. Yet, the Yankees plan to do just that with Eduardo Nunez–at least, versus LHP. The light-hitting infielder, who enjoyed a career year in 2012 (96 OPS+), will likely steal at-bats from Hafner versus southpaws, as he owns a career .298/.332/.436 line against them. Granted, while Nunez only has 202 career PA’s against left-handed pitching, Pronk posted a miserable .197 BA against them in 2012–so using Nunez might be necessary, albeit odd, evil.

Pennon Group Upgraded to “Outperform” by Royal Bank of Canada