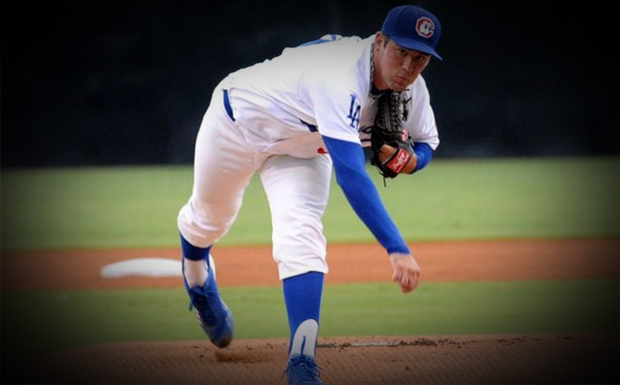 Suddenly armed with the game’s highest payroll bankrolled by an aggressive and free-spending new ownership group that took over last season, the Los Angeles Dodgers shipped away several of their top prospects in trades. Promising pitchers like Nate Eovaldi, Allen Webster and Rubby De La Rosa are no longer in the Dodgers system, though 21-year-old right-hander Zach Lee remains.

Of course, the Dodgers don’t seem keen on relying upon help from their farm system to contend in 2013. A glance at their roster shows an abundance of veterans in the lineup, the rotation and the bullpen. They are undoubtedly built to win it all this season.

Lee could make his Major League debut in 2013, but another pitcher – Korean international free agent Hyun-Jin Ryu – is expected to contend for a rotation spot in spring training.

Here are the Dodgers top 10 prospects entering the 2013 season:

1) The 21-year-old Zach Lee was drafted by the Dodgers in the first round (28th overall) in 2011 and swayed from playing quarterback at LSU. The power right-hander boasts a high 90s fast ball, and a curve ball, slider and change-up.

2) Yasel Puig was part of the Dodgers spending spree in 2012 when he was signed as a premium international free agent out of Cuba. He was given a seven-year, $42 million deal, and the Dodgers believe he has the potential to rapidly ascend through their system. The 22-year-old outfielder hit .354 with a 1.076 OPS in 82 at-bats between rookie league ball and advanced Single-A.

3) Hyun-Jin Ryu was inked as a highly regarded international free agent and could begin his pro career in the United States in the majors. He was 29-16 with a .269 ERA, a 1.15 WHIP and 8.8 strikeouts per nine innings over two seasons in the Korean Baseball Organization. Ryu could slide in behind Clayton Kershaw and Zack Greinke in the Dodgers rotation.

4) Corey Seager‘s older brother, Kyle Seager, is a bright young infielder for the Seattle Mariners. The younger Seager was a first round pick (18th overall) out of high school last summer. Drafted as a shortstop, Seager will likely have a long-term home at third base, which is Kyle’s position. He hit .309 with eight home runs, 33 RBI and a .903 OPS in 175 at-bats for Ogden in the Pioneer League last year. He could swiftly climb the Dodgers minor league ladder.

5) An over-slot signing in the 11th round of the 2010 draft, Joc Pederson projects as a corner outfielder who can hit for average and power while also stealing some bases. After a sluggish start to his pro career, the 20-year-old left-handed hitter was impressive at advanced Single-A Rancho Cucamonga last season, batting .313 with 18 home runs, 70 RBI, 26 stolen bases and a .913 OPS.

6) A first round pick (16th overall) out of Stanford University in 2011, Chris Reed is a 22-year-old left-hander who needs to develop more consistency with his plus fast ball, slider and change-up. He received a mid-season promotion from Rancho Cucamonga to Double-A Chattanooga, and it remains to be seen whether he will be a late-inning reliever or a starter, though last year he started in 17 of the 19 games in which he appeared.

7) A Cuban defector who became eligible for the draft last year, 23-year-old left-hander Onelki Garcia tossed two scoreless innings in his only appearance at Rancho Cucamonga. He has a low to mid 90s heater, two breaking pitches and a change-up. The Dodgers believe he can quickly climb their system.

8) A 23-year-old right-hander, Matt Magill struck out 168 in 146.1 innings at Double-A Chattanooga last season. He also walked 61 batters. He tends to induce ground balls when he doesn’t get strikeouts, so improving his command will help him become even more effective.

9) Chris Withrow was a first round pick (20th overall) out of high school in 2007, and a lack of command has delayed his development. His plus fast ball and curve ball are his main weapons, and how he commands those offerings will determine if his Major League future is as a starter or a reliever.

10) Alex Castellanos was in the Rafael Furcal deal in 2011, and at 26 he is on the older side for a prospect, but he has a .294 average and a .874 OPS in five minor league seasons. Impatient at the plate, and not known for drawing walks, Castellanos does have speed (he stole 16 bases at Triple-A Albuquerque last season) and he can play multiple infield and outfield positions, so perhaps a utility role in the majors is possible.